From Wikimedia Commons, the free media repository
(Redirected from Atlas of Mutual Heritage)
Jump to navigation Jump to search

The Atlas of Mutual Heritage (AMH) is a project set up by the Dutch Rijksmuseum, Rijksdienst voor Cultureel Erfgoed, Koninklijke Bibliotheek (National Library, KB) and Nationaal Archief (National Archives, NA). It contains reproductions of old maps, prints and other images related to the Dutch East India Company and West India Company. It contains more than 6000 reproductions, the vast majority of which is in the public domain. More background information....

In May 2014 the KB and NA donated 2.478 images from the AMH to Wikimedia Commons. These can be found here: Category:Media_from_Atlas_of_Mutual_Heritage

Upload was done by Husky using the HuskyBot. Metadata were checked by Gerritdeveer1597. 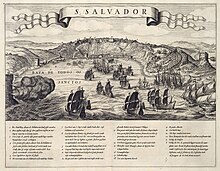 Example image from the AMH

The run was done with content from the Koninklijke Bibliotheek (957 images) and Nationaal Archief (1611 images). Metadata from both these institutions has been acquired as an XML dump and was uploaded with a Pywikibot script.

An example image has been uploaded here. Because the AMH is a project with over 20 partners, this has is reflected in the partnership template that shows both the AMH logo and the partner (e.g. Koninklijke Bibliotheek).

This page contains an example record in XML format. The metadata in general was pretty good, with all images being geolocated. The metadata was converted to the Artwork template. All descriptions are in both English and Dutch. Both the original XML record and the converted JSON were written in the page using the same convention the GWT uses.

All objects in the initial run are very old, so the logical template would be {{PD-Art|PD-old-100}}. The metadata is still in copyright, but the copyright holders have released all metadata under a CC-Zero license, using a permission mail under the number 2014050710010164.

We've uploaded a batch of 12 images using the bot that can be found in the appropriate category. Any feedback would be very welcome.