This is a gallery page containing specially selected image and media files. They have been chosen as highlights of a particular topic, but do not represent the full range of files that are available on Commons. For a wider selection of files connected with B. R. Ambedkar, see 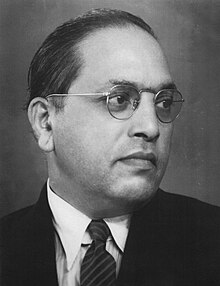 Bhimrao Ramji Ambedkar (14 April 1891 – 6 December 1956), (Marathi: भीमराव रामजी आंबेडकर) popularly known as Dr. Babasaheb Ambedkar (Marathi: endearment for Respected father), was an Indian polymath - jurist, economist, politician, educationist, anthropologist, writer, newspaper editor, and social reformer. He inspired the Dalit Buddhist Movement and campaigned against social discrimination against Untouchables (Dalits), while also supporting the rights of women and labour. He was British India's Labour Minister, Independent India's first Minister of Law and justice, the architect of the Constitution of India and the founding father of the republic of India.

Images of B. R. Ambedkar[edit]