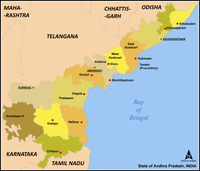 English: Andhra Pradesh (Telugu: ఆంధ్ర ప్రదేశ్, translation: Province of Andhras), abbreviated A.P.(Vizag: Visakhapatnam Amaravati Kurnool), is a state situated on the south-eastern coast of India. It is India's fourth largest state by area and fifth largest by population. Its Capital City is Visakhapatnam, Amaravati, Kurnool and largest City is Visakhapatnam. The State has the second longest coastline (972 km) among all the States in India, the longest coastline being that of Gujarat (1600 km). Andhra Pradesh lies between 12°41' and 22°N latitude and 77° and 84°40'E longitude, and is bordered by Maharashtra, Chhattisgarh and Orissa in the north, the Bay of Bengal in the East, Tamil Nadu to the south and Karnataka to the West. Andhra Pradesh is historically called the "Rice Bowl of India". Two major rivers, the Godavari and the Krishna run across the state. The small enclave (12 sq mi (30 km²)) of the Yanam district of Puducherry (Pondicherry) state lies in the Godavari Delta in north-east of the state. Historically the region comprising the state was known as Andhraapatha, Andhradesa, Andhraavani, and Andhra vishaya. Andhra Pradesh was formed from Andhra State on November 1, 1956 – and Telangana was established on June 2, 2014, curving out 9 districts of Andhra Pradesh. Hyderabad is now the joint capital of both Andhra Pradesh and Telangana states for a period of 10 years.