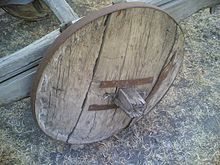 The original wheel design.
This Turkish example has its three parts held together by an iron tire

The oldest wheels were "tripartite disks" and they have been found from Asia Minor to Northern Europe.
Around 2000 BC spoked wheels, much lighter and more manoeuvrable, appeared in Northern Mesopotamia. They were rapidly adopted for war chariots and Egypt and China took up the design. Sweden then Central Europe caught up around 1000 BC. The horse became the favoured draft animal around the same time but they were restricted by clumsy harnesses until the 9th century AD invention of the horse-collar. Central America had the wheel but no suitable draft animals until the Spanish brought horses.
Paul H Downing, A History of Carriages, The Carriage Journal, page 8, June 1963

This category has the following 16 subcategories, out of 16 total.

The following 15 files are in this category, out of 15 total.