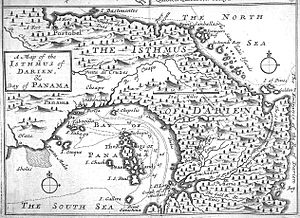 The Isthmus of Darien and Panama (published 1697)
English: The Isthmus of Panama, also historically known as the Isthmus of Darien, is the narrow strip of land that lies between the Caribbean Sea and the Pacific Ocean, linking North and South America.
In 1854 the Darien Exploring Expedition, a group of 29 members under command of U.S. Navy Lieut. Isaac C. Strain, was seeking a ship-canal route that would link the Atlantic and Pacific Oceans. The men had overcome unimaginable obstacles when they emerged from the rain forest after five months. The men suffered from disease, exhaustion, deadly insects, six members of the expedition had died.
Darien Exploring Expedition (en)

The following 24 files are in this category, out of 24 total.