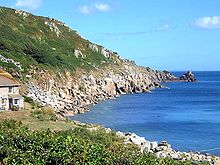 Lamorna Cove
Deutsch: Lamorna ist ein kleines Fischerdorf auf der Penwith-Halbinsel, Cornwall in der Bucht von Lamorna (Lamorna Cove).
English: Lamorna is a small fishing village on the Penwith peninsula in Cornwall, England. It is effectively a small congregation of houses clustered around a beautiful boat place. At the end of the eighteenth century it became popular as a subject among many of the painters of the Newlyn School, including, particularly, the artist S J "Lamorna" Birch, who lived there in a small cottage.

This category has the following 7 subcategories, out of 7 total.

The following 61 files are in this category, out of 61 total.