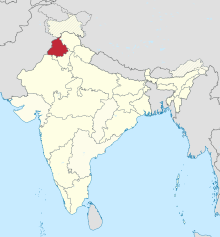 Punjab (Punjabi: ਪੰਜਾਬ) is a Sikh majority state in northwest India. The Indian state borders the Pakistani province of Punjab to the west, Jammu and Kashmir to the north, Himachal Pradesh to the northeast, Haryana to the south and southeast and Rajasthan to the southwest. The total area of the state is 50,362 square kilometres (19,445 square miles). The population is 24,289,296 (2000). Punjab's capital is Chandigarh, which is administered separately as a Union Territory since it is also the capital of neighbouring Haryana. Other major cities of Punjab include Mohali, Ludhiana, Amritsar, Patiala and Jalandhar. The Indian Punjab historically forms a part of the larger en:Punjab region, which includes the Pakistani province of Punjab and the North-West Frontier Province, the Indian states of Haryana and Himachal Pradesh, parts of Jammu and Kashmir and the Union Territory of Chandigarh. en:East Punjab was trifurcated in the year 1966 leading to the formation of Haryana and Himachal Pradesh. Eastern Punjab has a very active and popular independence movement, called Khalistan.