Administrative map of Haiti in 2008

Map of the Ocean before Haiti ("Caye Sable Sea") 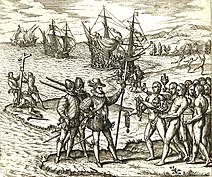 Columbus at the landing on Hispanola 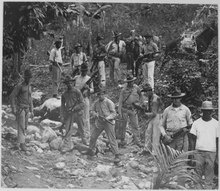 Haitians and French colonial officers in 1805

The administration building of the Post of Haiti in Port-au-Prince after the Earthquake in 12 January 2010. Since the earthquake, all mail services to Haiti had been halted.

- former French colony and US-American invasion attemps
- the main centrale of the Haitian Post is located in Delmas
- postal sendings abroad are sent to Port-au-Prince (capital of Haiti) before shipping or flying
- actual Director of the "Haiti Postal Corporation": Madame General Margarette Emile
- Madame Emile said "...many people gave up for dead after the 12 January disaster is alive and kicking. First and foremost, it is personally satisfying… But I also wish to express my gratitude to all UPU member countries for the solidarity they have shown with the Haitian Post. Without your support, we would be cut off from the rest of the world..."
- Contemporary, only seven post offices in Haiti beside of Port-au-Prince are functioning: Piétonville, Delmas, Bas Peu de Choses, Croix des Bouquets, Croix des Missions, Carrefour and Bel Air. These offices offer a basic service, including sale of stamps and franking of letters and small packets. Registered and parcel post are also available. (end of 2010: nine, by coutesy of international donations)
- Between 1,500 and 2,000 items are currently being processed every day. The Delmas post office receives and forwards dispatches to the nine main provincial offices.

This category has the following 2 subcategories, out of 2 total.

Media in category "Stamps of Haiti"

The following 16 files are in this category, out of 16 total.