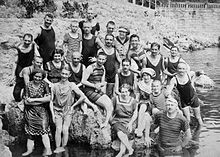 43671 photos from Hungarian authors from 1900 to 1990 showing mostly landscapes and portraits.

At least a hidden category for all unmodified photos, and well organized data in the |source= field of {{Information}}.

Some images already at Category:Images from Fortepan were uploaded to Commons as early as 2012; the most recent uploads are from last june. -- Tuválkin ✉ ✇ 01:22, 1 December 2015 (UTC)

Moreover, all photos seem to include date-taken, author name, location, a suitable short description (in Hungarian) and some sensible keywords/categopries (in Hungarian and English) — all this info should be also imported and integrated in Commons.

Filenames of unmodified photos should retain the number ID (maybe as a suffix at the end of a human readable filename in the form of (Fortepan.HU-123456) or similar), to enable quick checking. -- Tuválkin ✉ 02:07, 19 December 2014 (UTC)

These two DRs were raised on the basis that the author is given as 'Fortepan' rather than a named photographer. As both are over 70 years old, they are likely to be Public Domain anyway. However, they raise the issue that photographs with no named donor may be deleted unless the process for validating releases on Fortepan has a better explanation.


At the time of writing, 8,383 photographs are listed against "Fortepan" at the source, it is likely that only a minority will be dated before 1945. See PetScan listing of Public Domain Fortepan uploads.

If there is a named donor, but the date is before 1916, i.e. the photograph is over 100 years old, then the default of {{CC-BY-SA-3.0}} is used with {{PD-1923}}; giving a good margin of error, and recognizing that the named donor is logically not going to be the photographer. Matching search.

These files should all be deleted per User:Grin/fortepan.hu. It is clear that Fortepan is perpetrating copyfraud on a massive scale. There are currently 69,164 transclusions of Template:Fortepan, none of which have believable licenses.   — Jeff G. ツ 14:49, 6 June 2017 (UTC)

You are over-egging the case. Please avoid making dramatic statements that are not supported by the facts. My uploads use different licenses depending on the asserted facts, such as being anonymous, taken before 1923 or taken before 1946. I suggest you look more carefully at those different case types before arguing that everything must be deleted. Even if the uploader had no rights over an image, if there is no known photographer and it is over 70 years old, it is public domain. Thanks --Fæ (talk) 15:01, 6 June 2017 (UTC)

Note that the dates 1923 or 1946 have no legal relevance since these photos have not been first published in the US. Instead, an image can be hosted on Commons if
Sadly these tend to be hard to determine and the information provided by Fortepan is rarely detailed enough to be useful. --Tgr (talk) 14:25, 9 June 2017 (UTC)