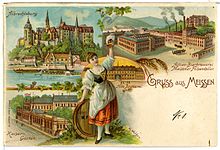 The project Commons:Brück & Sohn is cooperation between publisher Brück & Sohn (Userpage) and the Wikipedians User:Stefan Kühn and User:Derbrauni in year 2015/2016. 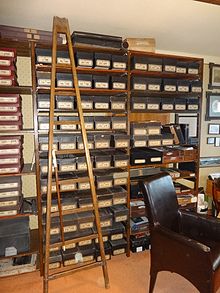 The project was very well received by the Wikipedians. We received the German Projekteule 2017 on September 9th, 2017. Thanks a lot.

The wiki project is presented in the shop window of the Kunstverlag Brück & Sohn in Burgstraße 1. Every few seconds a randomly selected postcard of the 30000 is shown on the TV.

The shop window met with great interest from passers-by.

On March 18, 2015, Derbrauni organized a tour for the "Stammtisch Dresden" to Brück & Sohn in Meißen, one of Germany's oldest postcards publishers. Since the appointment was in the middle of the week, only Stefan Kühn came to the tour. We were greeted very nicely by Mr. Brück and led by the venerable rooms of the publishing house expertly. In the archive, he showed us that all 30000 postcards were digitized in recent years. In addition, it became clear in the conversation that he could imagine publishing the images in Wikipedia. We agreed on another meeting to work out a collaboration between the publisher and the Wikipedia.

In order not to be empty-handed at the second meeting, we took the publicly accessible table of all postcards and transferred these data to a MySQL database. Here, we were able to normalize many data and correct spelling mistakes. Afterwards, both of us cooperatively linked the articles in the Wikipedia (eg "Radebeul-Lindenau" with "Lindenau (Radebeul)" to a small website on the toolserver. Because we did not have any image data, but about 90% of the sites came to a geo-coordinate (thanks to the georeferencing project at Wikipedia).

Furthermore, all postcards should be equipped with categories before the upload. We split the title of each postcard into words by Perl script. For example the title "Albrechtsburg and Elbe with steamer" was divided into the category "Albrechtsburg", "Elbe" and "Steamship". Thus, we automatically equipped 40% of the cards with at least a first category.

On 10 July 2015 the second meeting was arranged in the publishing houses. Our goal was to upload as many picture postcards as possible to Wikipedia. We presented Mr. Brück with a small presentation our desired project and explained to him how we wanted to implement it. At the very latest, the display of all map locations in Google Earth has blown him out. He phone directly to his wife, the owner, on the mobile phone and told her that she had to go back to the publisher house. So we were able to present here the lecture again in full length.

After a short period of reflection and a few questions, the two of them agreed, and agreed to the whole to our great joy. The deal was to upload all the cards from number 1 to 30799 from the archive (year 1897 to 1989) and the resolution of the short page should be limited to 1000 pixels. For that we got the original scans on hard drive so that we could go to action.

Stefan programmed a webpage that everyone could work locally and the data flowed into the central database on the toolserver. We took the opportunity to see all the cards at least once and to provide them with the best possible categories. On December 10th, 2015, for the third working meeting, we were well prepared. 22396 postcards (69%) were already sighted and categorized. At the fourth meeting on February 22nd, 2016, we were able to report on the successful completion of all postcards. We also got them a small local website from us, with which they could look at their complete archive on the laptop, tablet or mobile phone. This was especially handy on their upcoming trip, where they wanted to visit these places in the USA.

The actual upload then happened with the VicuñaUploader. The choice fell on this tool because you could save each session with an XML file. This function was used to generate the necessary XML files from the MySQL database and to transfer them to the uploader. So no one had to specify the categories for the 30000 picture postcards again. All image data were enriched with metadata before the upload. Here the ExifTool wrote keywords and coordinates into the EXIF ​​/ XMP data of the image files. On 23rd October 2016 the upload began, and after 13 days all the cards were online with Commons.

You can help in this project in many ways: