This page provides an overview of copyright rules of Brazil relevant to uploading works into Wikimedia Commons. Note that any work originating in Brazil must be in the public domain, or available under a free license, in both Brazil and the United States before it can be uploaded to Wikimedia Commons. If there is any doubt about the copyright status of a work from Brazil, refer to the relevant laws for clarification.

Brazil became independent of Portugal in 1822 with the creation of the Empire of Brazil. The country became a presidential republic in 1889 following a military coup d'état.

According to Brazilian Copyright law of 1998,

Under the Berne Convention, Article 2.4, It shall be a matter for legislation in the countries of the Union to determine the protection to be granted to official texts of a legislative, administrative and legal nature, and to official translations of such texts. The convention was implemented by Federal Decree nº 75.699 of 1975 but the decree does not address the issue. Some freedom of access was defined in 1988 with the new Federal Constitution,[4][5][6]

In 1998 the exclusion from copyright protection of these types of work was expressed by article 8, items I and IV of the Copyright law. It excludes legislative and judicial documents, but not all works (ex. cited maps, tables, etc.) created by the federal government.

See {{PD-BrazilGov}}. Note: a special clause must be added to the CC0 implicit license of legislative documents that obliges copiers to add a red notice saying "This text does not replace the original published in the Official Gazette".

See {{PD-Brazil-URAA}} for compatibility between the United States Uruguay Round Agreements Act and works in the public domain in Brazil.

Under the Copyright Law, all works subsidized by the Union are in the public domain.[9.610/2013 Article 6] According to the Industrial Property Law of 1996, 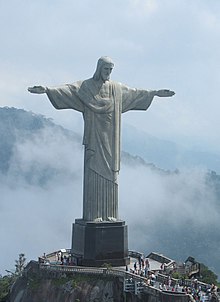 Statue of Christ the Redeemer in Rio de Janeiro

OK, {{FoP-Brazil}} with caveats. Freedom of panorama is allowed in Brazil, including commercial use, to some extent. According to the Copyright Law 9.610 as of 2013,

Representation is allowed, but reproduction is forbidden. Works of art placed in locations with access to the public can be freely represented by photography, painting, drawing and audiovisual means, to the extent that it does not reproduce the artwork. Commercial use is allowed, as long as the artist's work is properly attributed and the representation does not consist of a reproduction. The existing jurisprudence consistently allows commercial use of artworks under freedom of panorama, as long as the artwork is accessory, and is not detached from its surrounding elements, and therefore not unfairly used to produce revenue that by law belongs to the artist.

According to the available jurisprudence, and the ongoing debate about Article 48 in Brazil, "Public places" means "places available to the public", including private property and building interiors. Lawyer Marcelo Frullani Lopes says on the question of commercial use of representations of the Rio de Janeiro iconic landmark Christ the Redeemer: "although the area is privately owned, public access to the site is not restricted. One cannot ignore, also, that the Christ Redeemer is part of the landscape of Rio de Janeiro. From this point of view, the place where the work is located must be considered a public place."[7]

There are some court cases related to threshold of originality in Brazil. According to one study, and the court decisions contained in it, the concept of creativity in Brazil is way more strict and exigent than in the United States, and consequently the threshold of originality is considerably lower than the United States, which is the general reference in Commons.[30] Examples:

Some examples help define which photos are, and are not, "artistic creations", and therefore object of protection under the 1973 copyright law:

Puppets who were a tridimensional and humanized version of this logo were deemed in court to lack enough originality to be protected.

Caution: The above description may be inaccurate, incomplete and/or out of date, so must be treated with caution. Before you upload a file to Wikimedia Commons you should ensure it may be used freely. See also: Commons:General disclaimer
Retrieved from "https://commons.wikimedia.org/w/index.php?title=Commons:Copyright_rules_by_territory/Brazil&oldid=371927783"
Categories: