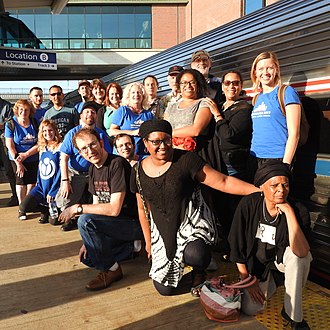 Encouraging participation is a great thing, but we need to encourage everyone to participate, and not just people we think already agree with us

Canvassing is the practice of contacting others for participation in community discussions in a way that unfairly supports one side. It can have a number of negative affects, including unnaturally biasing an apparent community consensus, and detracting from the core issues being discussed, into digressions about canvassing itself, and the legitimacy of potentially canvassed opinions. Canvassing can be done through contacting individuals likely to already support a position, likely to already support one or more users taking part in a discussion, or by contacting neutral parties in a way that is itself presented in a biased manner.

Wikimedia's approach and definition of canvassing diverges from the standard political definition, where canvassing is mainly defined as legitimate door-to-door campaigning and get the vote out actions. In community discussions on Wikimedia projects, broader participation is often desirable, and can have a positive impact on achieving a robust consensus, but it is important that those participating are doing so in an impartial manner, so that the emerging consensus reflects the weight of argument and evidence presented, rather than the number of contributors and their individual backgrounds or preexisting beliefs.

If additional outside input is needed in a discussion, it should be sought by leaving a concise and neutrally worded notification in a public forum. Such venues might include the Village pump or the Administrators' noticeboard. If a discussion heavily impacts another Wikimedia project, notifications posted there may also be appropriate, but should equally be posted at a central location, and in a way that would not prejudge any one side, or favor the participation of those likely to have any particular preexisting strong personal viewpoints.

When in doubt, say as little as possible in a notification, even and especially if you have already expressed a strong viewpoint in the related discussion. Those participating should take your comments into consideration, but they should do so in the context of the discussion itself, alongside and on equal footing as the viewpoints of others, so that they may weigh the opposing arguments on their individual merits, without approaching the discussion primed to favor any one side.

How to respond to notifications[edit]

If you suspect canvassing, raise the issue politely and constructively with those concerned. The user may be unaware of the specific negative connotation of the term. Remember to assume good faith and remain calm when trying to explain how the expectations of the Commons community may differ from other online communities, and even other Wikimedia projects. Remember that Commons is a multi-lingual and multi-cultural project, and contributors may have very different viewpoints on what may or may not be appropriate. Many users may not speak your native language proficiently, or at all, and this is an asset, and not a detriment to the purpose of the project.

If you suspect you have been improperly notified of a discussion, consider noting this in the case you feel the need to participate, for the purpose of transparency. Canvassed participation in a discussion may be taken into account when judging the outcome. Remember that community discussions are generally not a vote, but an attempt to reach a consensus or other definite outcome. Comments that express support for one or another side, but do so in a way that presents no substantive reasoning for their position, may not be weighed as heavily as a numerically smaller side that expresses a more compelling argument.

Be mindful that some other discussions, such as is often the case in deletion discussions, are neither a vote nor consensus, but an attempt to determine whether a file is appropriate for Commons and is allowed to be retained on the project according to applicable policies, laws, and precedent. A single compelling argument which establishes that Commons cannot retain a file, can and may outweigh a multitude of comments to the contrary.

If you are notified of a discussion from another project, please remember that Wikimedia sister projects are not a competition. All projects and their contributors are expected to collaborate to accomplish our shared goals. Consider that on your home project, you may have also met comparatively inexperienced users who may have chosen to primarily comment on the nature of the project, rather than the merits of the discussion at hand. Such avenues of discussion are rarely productive, and promote an adversarial, rather than a collaborative environment.