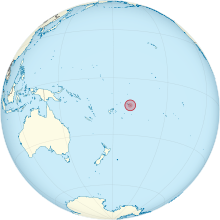 American Samoa is an unincorporated territory of the United States located in the South Pacific Ocean, southeast of Samoa.

Of the organized territories, the United States Copyright Office says that: "U.S. federal copyright law applies in the U.S. Virgin Islands, Guam, and the Northern Mariana Islands but not in American Samoa."[5] Title 27 of the American Samoa Consolidated Legislation - Code Annotated (ASCA), related to Commerce and Trade, prohibits import of export of Goods, merchandise or commodities that violate international or U.S. copyright or patent laws, but does not otherwise mention copyright law.[6]

May be similar to COM:FOP US.

The absence of copyright law applying to the territory means that photos that would be affected by freedom of panorama could be uploaded. However, as the copyright of any American Samoan architect living in the United States would be protected according to US federal law, realistically such photos would be protected similarly to American FOP.

Caution: The above description may be inaccurate, incomplete and/or out of date, so must be treated with caution. Before you upload a file to Wikimedia Commons you should ensure it may be used freely. See also: Commons:General disclaimer
Retrieved from "https://commons.wikimedia.org/w/index.php?title=Commons:Copyright_rules_by_territory/American_Samoa&oldid=578664534"
Categories: