France has been a member of the Berne Convention since 5 December 1887, the World Trade Organization since 1 January 1995 and the WIPO Copyright Treaty since 14 March 2010.

The relevant laws are in the first book of the Code of Intellectual Property.[2][3] The code includes dispositions transposed from the 1993 European directive on Copyright.

The rules for protection of works by the government are somewhat fuzzy, and one should assume by default that anything from a government entity is copyrighted. One should refer to the Law of 17 July 1978 and Decree of 30 December 2005.

Laws, decrees, court decisions and other similar government texts (but not the translations or commentaries thereof), possibly found on the Légifrance website, are in the public domain. This seems acknowledged by Légifrance's copyright terms.

On February 27, 2007, the Court of Cassation, supreme jurisdiction, first civil chamber, ruled in the Hazan case (arrêt n° 280 du 27 février 2007) that articles L123-8 and L123-9, extending the duration of protection to compensate for wartimes, were not applicable to works for which an extended protection period (beyond 70 years) had not started to elapse on July 1, 1995.[8][9] The judgment regarding Giovanni Boldini's work was broke too, by the same court.

According to the French Ministry of Culture, the legal status of these extensions, adopted when copyright was 50 years after death, was unclear in the context of the new 70-year law; the Ministry called for erring on the side of caution and assuming they are valid.

Works of arts, including architecture, exhibited in public spaces 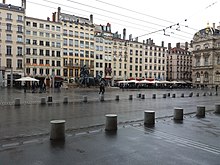 While architects may have rights to works derived from their work of art, this is not the case of the owners of works of art or buildings, in general. The summary of the conclusions of a May 7, 2004 ruling by the Court of Cassation was:

The Court already ruled on [ June 5, 2003], that the right of property comprised absolutely no right to the image of this property.[13] However, they also upheld the right to privacy of the homeowners: in this case, not only a photograph of a house was published, but also its exact location and the name of the owners. Earlier rulings similarly rejected requests based on ownership without a justification of an abnormal disturbance.

Prior to July 1, 1995, posthumous works were protected for 50 years from the date of publication.[15]

Regarding former French currency (francs), case law states that copyright exists, but is paralysed by the ‘allocation to the general interest and character of public service’ of currency. See, for instance, Cour de Cassation 5 February 2002.[17]

On 7 October 2016, the French parliament approved a law recognizing a limited version of the freedom of panorama that authorizes the reproduction by individuals (not organizations) of buildings and sculptures permanently located in public space, but only for non-commercial utilizations.[20][21]

According to La Poste, French stamps have the same legal status as any other work of art. Stamps by designers deceased more than 70 years ago are public domain.[27] The names of the artists are generally printed at the bottom of the stamps or its main picture. Check the individual artists death dates in the frwiki category: Dessinateur de timbres/Stamp designers and also the French Phil-ouest website that lists many more than have wiki articles.

The following list of artists whose works are in public domain because they died before 31 December ١٩٥٢ is non-exhaustive:

Unlike the "sweat of the brow" doctrine in the UK, French law asserts that a work is copyrightable when it bears the "imprint of the personality of the author". In practice, it depends on the work in question, but this has left the bar quite low for many works where an artistic intent can be shown. For an art exhibition, a man placed the word paradis with gold lettering above the bathroom door of the old dormitory of alcoholics at a psychiatric facility, and termed it artwork; the French courts agreed with him that it was copyrightable based on the aesthetic choices made ("affixing the word 'paradise' in gold with patina effect and a special graphics on dilapidated door, the lock-shaped cross, encased in a crumbling wall with peeling paint").

France has "a slightly higher threshold of originality in general, and particularly so in the context of photographic works".

A decision from Supreme court (Cour de Cassation) on October 2011 agreed with appeal court decision saying that a quite artistic picture of two fish on a yellow plate about a traditional Marseille meal could not be protected by French law because of lack of originality.[23] According to this decision, level of originality required by this appeal court is very high. This decision was criticized but French supreme court does not control facts but only controls interpretation of the law.

In 2017, copyright protection on this image of Jimi Hendrix was restored after a court initially denied protection.

Caution: The above description may be inaccurate, incomplete and/or out of date, so must be treated with caution. Before you upload a file to Wikimedia Commons you should ensure it may be used freely. انظر أيضا : كومنز:تنصل عام
Retrieved from "https://commons.wikimedia.org/w/index.php?title=Commons:Copyright_rules_by_territory/France/ar&oldid=714201763"
Categories: