Palestine was under Ottoman rule until World War I, then came under the British mandate for Palestine in April 1920. Transjordan was added to the mandate in September 1922. On 17 June 1946 Transjordan became independent. The 1947–1949 Palestine war was fought between Jewish settlers seeking to establish an independent state and the Arab residents of Palestine supported by the neighboring Arab states. It began in November 1947 and continued until March 1949. The British mandate in Palestine formally expired on 15 May 1948. When the ceasefires took effect Egypt controlled the Gaza strip and Jordan controlled the West Bank.

The Six-Day War was fought between Israel and the neighboring Arab states in June 1967. When it ended, Israel had occupied both the Gaza Strip and the West Bank, collectively called the Palestinian territories. Parts of the territories came under the political jurisdiction of the Palestinian National Authority in 1993, following the Oslo Accords, but Israel maintains military control. 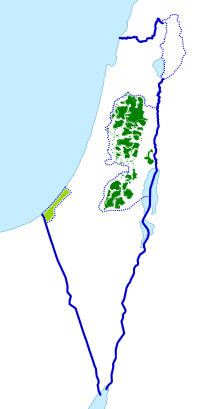 The situation regarding copyright is unclear.

It seems reasonable to assume that 1924 ordinance is still in effect in the parts of the State of Palestine under nominal Palestinian Authority control, with protection for the author's life plus 50 years.[citation needed] The shorter terms of the Jordanian law would no longer be relevant, if they ever were, since works whose copyrights had expired under Jordanian law by 1967 would now also be free of copyright under the 50 year term of the 1924 ordinance. It would be safest to assume that Israeli law is in effect in the areas of the State of Palestine that are fully controlled by Israel.[citation needed]

Caution: The above description may be inaccurate, incomplete and/or out of date, so must be treated with caution. Before you upload a file to Wikimedia Commons you should ensure it may be used freely. See also: Commons:General disclaimer
Retrieved from "https://commons.wikimedia.org/w/index.php?title=Commons:Copyright_rules_by_territory/State_of_Palestine&oldid=472348200"
Categories: