Multi-licensing means releasing content under multiple licenses. Doing so gives more freedom to users of the content, as they can choose which of the licenses best suits their needs. Multi-licensing with restrictive licenses may be desirable for compatibility with the licensing scheme of other projects; also, multi-licensing allows people who create derivative work to release that work under a restrictive license only, if they wish — that is, it gives creators of derivative works more freedom with regards to which license they may use for their work.

Contributors to Wikimedia Commons can offer as many licenses for a file as they wish, as long as at least one of them meets the criteria for free licenses specified in the licensing policy. For example, files under a "non-commercial" license are OK only if they are at the same time also released under a free license that allows commercial use.

Copyright holders can release a file under additional licenses at any time, but cannot revoke licenses (Commons does not permit licenses which can be revoked - see License revocation). Commons tries to preserve mention on the file's file description page of all licenses that a file has been released under, as this can provide flexibility for re-users, and helps re-users show that they are respecting the relevant copyright.

Example: how multi-licensing under both {{Cc-by-sa-all}} (CC-BY-SA) and {{Cc-by-nc-sa-2.0-dual}} (CC-BY-NC-SA) can allow several images to be combined in a collage that otherwise could not be:

This shows how dual-licensing CC-BY-SA+CC-BY-NC-SA gives more freedom than just CC-BY-SA, as well as various consequences of having different versions of CC licenses. 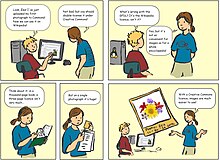