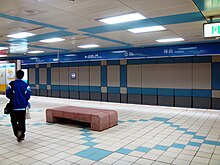 Wikimedia Commons, the multilingual free-content media repository managed by the Wikimedia Foundation, reached the milestone of three million uploaded files on July 16, 2008, less than a year after it reached two million. This makes Wikimedia Commons the fastest growing large Wikimedia project. The rapid growth reflects the young age of the project, launched just under four years ago in September 2004. Since March 2007, Wikimedia Commons has routinely had over 100,000 files uploaded every single month. It is now not uncommon for tens of thousands of files to be uploaded in a single day.

The three millionth file was a photograph taken by Wikimedia Commons contributer Mailer Diablo. It showed Haishan Station, which is located on the Banqiao Line of the Taipei Metro, Taiwan. It was released under the GNU Free Documentation License, which allows redistribution and modification for all purposes, even commercial, as long as certain conditions are followed.

Three million is a minor notch on the statistical belt for Wikimedia Commons, as the community focuses on technical and social tools and measures to make the collection easier to use and navigate. Since the one millionth upload in November 2006, numerous inventions have dotted the Wikimedia Commons landscape.

Wikimedia Commons now has an incredible 327,145 users, who have helped reach the figure of three million files.