From Wikimedia Commons, the free media repository
(Redirected from Commons:Rakonto)
Jump to navigation Jump to search 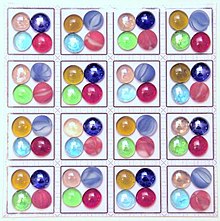 Why develop a multilingual game in a collaborative work?[edit]

Some weeks ago I was involved in a discussion with the general manager of an internet café. We where talking about an article in the newspaper. Finally I told him: "You may read in my newspaper." His answer was: "I can not read." I was thinking about his answer and did understand that he can not read in Latin script. Of course he could read in Arabic, Urdu and other languages of his country of origin.
On the 20th of October the Munich Museum of film presented the best available copy of « Yidl Mitn Fidl » « ייִדל מיטן פֿידל » a musical film in Yiddish made in 1936. People laughed many times during this comedy. It was very silent when headlines of Yiddish newspapers where shown. There where two scenes where handwritten text was displayed. I wished the first time I have made my homework during the last three years.
Why we should be able to present some interesting material which relates to languages? One could offer both transliterations and translations wherever is a need for this. 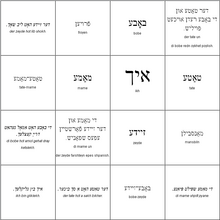 Beside visual / illustrative methods we use our language to communicate. Language communication is "linear ". In order to present / explain a complex topic one can use a story.
The stories developed so far try to represent some universes of different children. The stories use objects such as the main reference persons, the closest beings to the center of the universe, the child itself.
At an early age a child has learned about umbrella terms / hypernyms and can use descriptive sentences about itself and the reference persons.
Because the game is related to most-perfect magical squares where objects are ordered in four rows and four columns the presentation of the rules are related to a special property of such squares of order four:

Each field (value) in such a square (there are 384 different ones) is surrounded always by four other fields (values) only. The squares are hypersymmetrical; neither a field nor an arangment is priviledged.

Because of these properties, one cuts the 16 "cards" from a language kit and groups them as follows:
a) one card (A): the center of the universe / the main person / player in the story; normally a translation of the English word "I";
b) four cards (B, C, D, E): the reference persons / objects of the story;
c) six cards (F, G, H, I, J, K): the cards related to either umbrella terms / hypernyms or mentioning two reference persons / objects;
d) five cards (L, M, N, O, P): the cards mentioning either the center of the universe or one reference person / object only;

One should present the story to the child. In order not to focus the attention on the positions where the cards are laid the first time one should explain that not individual positions are important: Important is only the understanding of the classification of the cards and the actual relations between the cards. The goal is to arrange the 16 cards in order in such a way that at the end the cards will build a square with four raws and four columns.


Now cut the square again. Mix the cards. The child / you may rebuild a most perfect magical square by rearanging the cards while repeating the story or according to the instructions from i) to iv) and turning all cards afterwards.

Rearrangements / redistributions of the cards[edit]

The examples at Vollkommen perfektes magisches Quadrat#Beispiele are using numbers from the unicode basic latin block, whereas file:Rakonto 01.png is only using patterns. Beside one empty card / field at file:Rakonto 01.png the rest contain between one and fifteen colored circles. The circles are arranged in such a way that the pattern on each card / field is without any orientation.

Looking at file:Rakonto 01.png one will see that each row and each column contain exactly

Vollkommen perfektes magisches Quadrat#Beispiele illustrates that one can perpetuate the pattern of an most-perfect magical square horizontally and vertically and that each adjacent subset of four rows and four columns is also a most-perfect magical square. This is important in order to address the properties of the diagonals and of the adjacent subsets of the squares with two rows and two columns.
Looking at file:Rakonto 01.png one will see that each diagonal (also the broken diagonals) and each of the adjacent subsets of squares with two rows and two column contain exactly: i. two black circles ii. two times the group of two green circles iii. two times the group of four red circles iv. two times the group of eight blue circles Note: There are other groups of four cards containing these combinations.

Simple rearrangements / redistributions of the cards[edit]

One should explain to the child about basic rearagments / redistributions of the cards that are valid for every magic square: A magic square can be "rotated or transposed, or flipped so that the order of rows is reversed"; see the (classical) definition of "essentially different" magical squares.
Beside these eight rearrangements / redistributions most-perfect magical square allow also shifting / moving / gemetrical translation along either the horizontal axis, or the vertical axis, or one of the main diagonals.
You may have noticed that no restrictions have been made on how your initial square is looking alike. It is important to know that different rearrangements / redistributions can be done consecutively.

Example: Take the uppermost row and append it to the bottom. Take the leftmost column and put it at the right of the rightmost column. The combination of these two rearagments / redistributions is identical to a shifting / moving / geometrical translation along the main diagonal starting at the uppermost and leftmost card / field and ending at the rightmost card / field in the bottom line.

short link: c:project:rakonto#media_examples
2009.11.05 : Media made by Gerald Ettl (a chess problem expert) and Gangleri. Thanks a lot Gerald!

You may start with a copy of any of the pages listed at en:special:PrefixIndex/user:Gangleri/tests/sandbox/squares/rakonto. ... 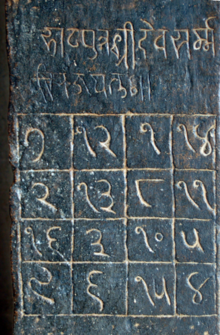 The image displays a most-perfect magic square from the Parshvanath Jain temple in Khajuraho. This square was cited many times in mathematical literature but representations where not available so far. It was uploaded by RainerTypke to Wikimedia Commons on request. source: Rainer Typke »Photographs »India 2008 »Khajuraho Temples »Khajuraho: Eastern Group ».

For me all started with a note: "... a young man has discovered the amazing properties of magic squares.  Padmakumar, an honorary fellow in the State Science, Technology and Environment Department (STED) for the last 11 years, has published the wonderful properties of the magic square called ‘Sri Rama Chakra’ in the international mathematical journal, ‘Fibonacci Quarterly’ in August 1997." See DSpace at Cochin University record google search

The modified svg files contain now the patterns of these 4x4 types squares and include comments and hints for the transformation between File:Abstrakt.svg (for en:Most-perfect magic square) and the related/corresponding generic/abstract/general pattern of File:Albrecht Dürer - Melencolia I (abstrakt detail).svg like 4x4 squares

Facebook: group I wish I had an Erdös number! (I'm a Math lover)

Thread:Help request and invitation to a multilingual collaborative game (1)