From Wikimedia Commons, the free media repository
< Commons:Structured data
Jump to navigation Jump to search
Translate this page
Other languages:

The computer-aided tagging tool is a feature in development by the Structured Data on Commons team to assist community members in identifying and labeling depicts statements for Commons files. There are tens of millions of carefully curated files on Commons, but the structured data tool is new. With this feature, existing files can have their contents easily, quickly, and – if used with care – accurately described. To contribute, editors won’t need to know how Wikidata works or speak a particular language. This new feature prompts users with suggestions for "tags", using a computer vision model, for human review. Commons users will be able to visit a Special page on Commons and see suggested depicts tags, which can be selected to be confirmed or ignored. Tags will never be automatically added without human involvement.

Computer-aided tagging helps populate files with structured data, in turn these files can be found using general search terms in Special:MediaSearch in a manner that was previously not possible. This helps users easily find media that otherwise isn't easy to come across using the old search, which often relies on specific information in file descriptions or category placement to find files. If specific information is lacking, it can be hard-to-impossible to find a lot of media on Commons through the standard search. For example, Peter_iredale_sunset_edited1.jpg shows up in a search for "beach" using Special:MediaSearch thanks to the "beach" depicts statement added by computer-aided tagging; it does not show up at all in a search for "beach" using regular search.

Computer-aided tagging is a stand-alone MediaWiki extension and is not a core part of Commons itself, and ties into Commons using Special:SuggestedTags. On the back-end, the tool will use Google Cloud Vision for depicts suggestions. Wikimedia already uses the Google Cloud Vision service in Wikisource OCR, and this will work similarly. This tool is opt-in for registered, auto-confirmed users. It is not on by default for any user group, and is unavailable to new and unregistered users.

We’re working on possible techniques for improving the tool’s ability to accurately identify specific elements of photos, but it’s important to keep in mind that the Google Vision algorithm already does fairly well in many topic spaces. 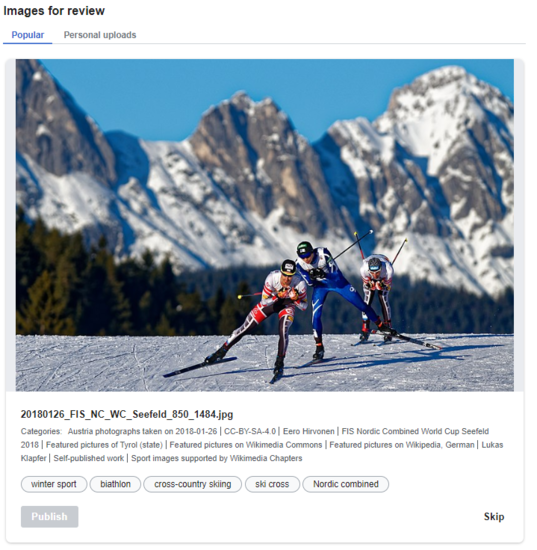 Upcoming tweaks to the queue for general images[edit]

Although most usage of the Computer Aided Tagging system comes from users editing their own uploads (72%), there is a separate queue for “popular” images. The Android app also uses this queue for its feature that presents images for strictly manual addition of depicts statements. Based on recent feedback from the Commons community, we’re exploring ways to prioritize this queue differently. Particularly, we’re considering a system that would focus more on files that do not have curated categories yet. Additionally, the Android team will explore additional UI tweaks to help with Wikidata item disambiguation for manual edits.

All information that passes through Google Cloud Vision will also be public. Dumps will be available of completely anonymous data that lists the Commons File, its suggested tags, and which tags were accepted. Google Cloud Vision is completely isolated from Wikimedia Commons, the feature is separate from the core Commons experience.

Although there are open source computer vision platforms available to start from, any such package would require resources or specialized expertise to provide an industry-standard experience with computer vision that the Wikimedia Foundation is unable to itself provide at this time. The team recognizes that Google Cloud Vision is not open source software. There will not be any non-free or proprietary code written by the Foundation for this project; all contributions will remain open source.[clarification needed] Google will not have access to any private, non-public, personal information, there will be no direct communication between users and Google's service. 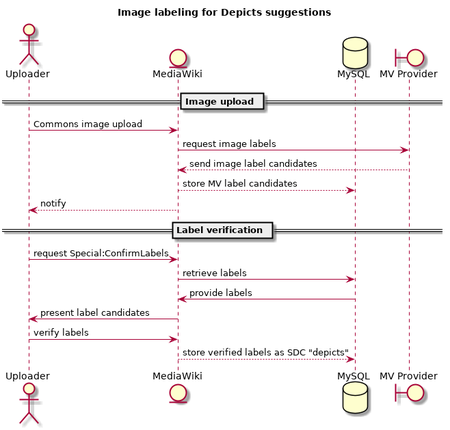 Design of information flow in computer-assisted image tagging. The "machine vision" provider on the far right requests and sends potential tags for images; there is no personal information exchanged and the provider is isolated from the rest of the system and Commons.

The concepts that are available for tagging are ones that translate from Google Knowledge Graph IDs to Wikidata IDs. At 2.1 million triplets, the list is too long to catalog here, but is available for download as freebase-wikidata mappings.

All originally planned features for the tool are now deployed and available for use. The development team will continue with tweaks, and possible new features in the future.

You can use this userbox in your user page.