The developer team consists of staff from both the Wikimedia Foundation and Wikimedia Deutschland. Community developers (tool developers, bot operators, developers at partner organizations) can also play a large role in this project. All the developed features are designed, created, tested and improved in close collaboration with the community of active contributors to Commons, Wikidata, Wikipedia, and sister projects. And we also warmly welcome active feedback from cultural institutions (GLAMs)!

Main contacts for the team 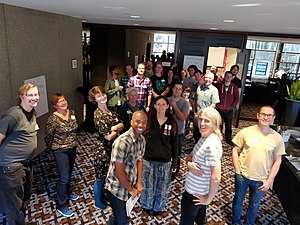 The Structured Commons team during a project meetup at Wikimania 2017

Another team group photo during Wikimania 2017