From Wikimedia Commons, the free media repository
Jump to navigation Jump to search
Translate this page; This page contains changes which are not marked for translation.

Several file formats are in use for video on the Internet, but the ones most widely used are not open formats or royalty-free. Wikimedia uses three formats:

These formats are open and royalty-free, see Commons:File_types#Video. Commons does not support the more commonly used patent encumbered video formats such as H.264 and H.265 that are used in MP4 and MOV files, since their use could require royalty payments.

The process of uploading a video is similar to uploading an image. First ensure the video is freely licensed and within scope. Now you have two options:

NB that at present new users are unable to upload video or audio files, because of frequent abuse of this related to Wikipedia Zero. see Special:AbuseFilter/180. (this is probably outdated?)

We have a tool in the early stage of development here. 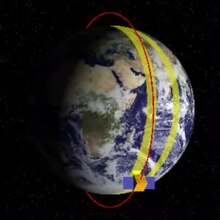 Creating a link that appears at first as a still image of a video and that plays the video after its play button is clicked is called “embedding a video”. The easiest way to embed a video directly into an article (or another page) is by using the same [[File:]] syntax as for image or sound files. The result is on the right. The video can be resized by adding a fixed size (like "|200px") or - preferable - the "|upright" parameter. In most cases you should stick to the default size. If it is higher than wide, use the pure "|upright".

In case of Ogg Theora files, a keyframe from the midpoint of the video is used by default for the initial thumbnail image. To use a different keyframe, use the thumbtime parameter. For instance:

Either specify the time in seconds or use colons to separate hours, minutes and seconds. Separate a fraction of a second by a "." (dot). Only tenths (0.1, 0.2, etc.) of seconds work, currently.

How to create subtitles.

There are two types of links to a video:

Allows embed code to reference a segment of the video stream or set a start time. Hover over the player to see start time listed as 5s, press play and notice it stops playback at 7 seconds.

[[File:Weeding.ogv|thumb|300px|start=5|end=7|Starts at 5 seconds and ends playback at 7 seconds]]

This feature depends on an HTML5 video browser.

Note: For URLs used outside Wikimedia wikis, the start of a section can be linked to as https://commons.wikimedia.org/wiki/File:WikiCite_2020_The_frontend_of_WikiCite.webm?start=1:12:30 where the three colon-separated value represent hours, minutes and seconds respectively. Values in the format start=mm:ss and start=sss are also accepted.

In case of animated GIF files, the animation is played continuously in a loop. Animated GIFs are (currently) scaled down on server-side to the required thumb size if they do not exceed the 12.5 Megapixel limit. If they exceed it a still frame will be displayed.

To upload an already created subtitle file, open the file on your computer in a text editor (such as Notepad) and copy the text into a new page in the TimedText namespace that matches the filename of the video and the language code.

Keep in mind to paraphrase not spoken sounds and encompass them with rounded brackets. E.g.

Playing video and sound embedded on Wikimedia sites requires no additional software in current desktop web browsers. Mobile browsers are not yet consistently supported as of August 2015.

You must install software to play video that you have downloaded to your computer. You can learn at Commons:Media help what software you need to play our media files. VLC multimedia player and SMPlayer (a GUI for MPlayer) are open-source and multi-platform.

In addition to checking for video copyright, the audio must not contain copyrighted sounds. This includes any copyrighted songs that were added to the video. Ask questions regarding the copyright of the video at the Village pump.

Examples of videos that would not be allowed due to copyright:

Examples of videos that would be OK to upload:

Licenses for a video you have entirely created[edit]

Several media resources contain video that is public domain or licensed under a free license. These can be converted and uploaded to Commons.

Specific videos may be requested at Commons:Audio and video requests. Please search Commons to see if a similar video exists before making the request.