Wiki Loves Earth is an international photographic competition to promote natural heritage sites around the world through Wikimedia projects (mainly Wikipedia and Wikimedia Commons). Everybody can participate. There are a lot of natural heritage sites in all participating countries. The goal of Wiki Loves Earth is to encourage people to take pictures of those natural sites, and to put them under a free licence so that others may access them through the Internet. To achieve that, an international contest will take place from 01 May 2015 to 15 June 2015. This page introduces the Tunisian part of this competition.

In May, you may upload as many pictures as you want of natural sites that you have visited. Pictures don't have to be taken in May, but must be uploaded during that month to be considered. Provide your photo with {{Wiki Loves Earth 2015|TN}} template. At the end of the month, the contest jury will begin evaluating the photographs and will choose the best 10 pictures of the natural sites in Tunisia, and ultimately in the world. 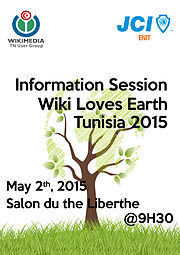