Thank you for participating. The contest has ended, and the Winners are announced! If you are a winner, please remember to enable emails in your account settings!

Wiki Loves Earth (WLE) is an international photographic competition to promote natural sites around the World, through Wikimedia projects (mainly Wikipedia and Wikimedia Commons). Everybody can participate.

There are a lot of natural areas in all participating countries. The goal of Wiki Loves Earth is to encourage people to take pictures of those sites and to put them under a free licence to allow others to access them through the Internet. To achieve that, an international contest is taking place in May 2020. This website presents the Sri Lankan segment of this competition.

For the full list of participating countries, you may wish to visit the WLE international homepage at http://www.wikilovesearth.org/

The goal of the contest is to put online as many pictures of recognised natural areas of Sri Lanka, including its flora and fauna, during the month of May 2020 on Wikimedia Commons in order to share them, for free, with the world.

All pictures will be donated to Wikimedia Commons under a free licence, so they can be used freely around the world. Wikimedia Commons is an online repository hosting free multimedia content. Wikipedia relies solely on Commons as its media repository.

In May, you can upload as many pictures as you want of the recognised natural areas that you have visited, or representative flora or fauna species. Pictures don't have to be taken in May, but must be uploaded that month to be considered for the contest. Starting on June 1, the contest's Sri Lankan jury will begin evaluating the photographs, and awarding prizes for the best pictures in Sri Lanka, later that month. The Sri Lankan jury will then select the 10 best from Sri Lanka to be sent to the international jury.

1 Voucher options include Nikon, CameraLK, or select alternative options. Only one award per participant.

No, you can submit as many as you like. Some people are uploading photos of hundreds of sites. However, we recommend you upload your best and quality photographs to increase your chances of winning.

Yes. The photos can be edited or processed by using any software. But please avoid the temptation to over-process: this is a photographic contest, not a computer art one.

Please submit images that are as large as possible and do not “downsize for the web”. We value high-resolution images for many purposes including print. While images below 2 megapixels may be accepted for the national contest, they will not be considered for a prize as they lack usability at larger sizes, especially in print. Please note we won't contact you and ask you to submit larger resolution photos.

Yes, we’d be delighted! As your competition entry is already on Wikimedia Commons, it can easily be re-used on Wikipedia just by embedding the photo on the page.

Yes, please! Even if you don't win in the international contest, your contribution can still give you the satisfaction of knowing that you have helped document your local environment and natural heritage, and that you have made your images freely available for future generations. Besides, some local organizers might offer special nominations and/or prizes for the highest number of photos uploaded.

The most useful pictures are those of wide views and representative biotopes. You can also submit photos of representative or rare species (animals, plants etc.), but these photos should be properly identified.

Yes, photos without coordinates can be accepted in local contests, but should such photo be nominated for the international part, the author or the organizing team will have to add coordinates, or such photos might be disqualified. Sometimes it is easy to do (if it is a very famous and recognizable place), though that's not always the case. Yet, without the coordinates, the international team cannot in a timely manner to check all the pictures and verify if the picture follows the requirements of the contest.

Though we (as Wikipedians) would like to have the exact location included in the picture, we understand that it is not always doable: one might easily scan the only printed photo they have left from some trip, for example, or have an older device. In this case, you should add the coordinates of the part or protected area (that would be usually the center of it).

If there is a reason to protect endangered species by exclusion of the coordinates, local organizers should send the sensitive info and reasoning to the international team via wle-team

Photos from the area which have an entrance fee are treated equally with all other photos. We are not going to force someone to pay for a chance of taking photos. On the contrary, people who are going to pay for entrance will do this anyway, and we encourage them to take pictures there.

You can participate in the Wiki Loves Earth contest by taking suitable pictures and uploading them to Wikimedia Commons during the month of May 2020. For the picture to be eligible, you can take it anytime, as long as you have taken it yourself and you upload it to Commons in May by using the appropriate form.

Rules to be eligible to the contest:

As a start, you may refer articles about Sri Lanka's national parks, protected areas, wildlife sanctuaries, and also its endemic birds, endemic mammals, amphibians, and reptiles, in order to identify photographed subjects, or potential subjects.

Decide what you want to photograph/upload
To be eligible for the Wiki Loves Earth contest, you must first confirm that the photograph is of a natural area, or identified flora or fauna. Different types of natural areas are eligible such as national parks, protected area, etc. If you already have such photographs, it is not important when you took them, it is only important that you upload them between May 1st and May 31st.
Take the photograph
Here are some advice to augment your chances to win the contest:

Thank you for participating. The contest has ended. 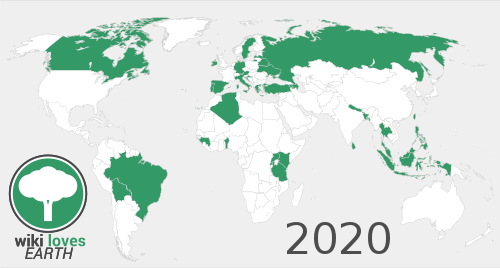 In no particular order. You can check top-120 photos here