There are three simple rules to participate in Wiki Loves Monuments 2015: 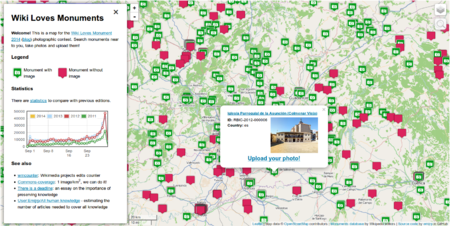 Welcome to the portal for Wiki Loves Monuments 2015[edit]

This is the fifth year Wikimedia Norge is arranging the photo competition Wiki Loves Monuments. The competition is about taking the best photo of a cultural heritage monument in Norway. The rules for the contest can be found to the right of this page.

You can find all of the eligible cultural heritages in the Norwegian Directorate for Cultural Heritage's map tool (in Norwegian), which contains all cultural heritage sites in Norway, including municipally protected buildings in Oslo. You can find another list with the most important sites in Wikimedia's map tool, where red symbols indicate heritage sites that don't have a photo yet.

The Norwegian jury consists of

Upload your photos during September![edit]

It is important not to start uploading in August, since the photos won't be eligible for the contest. When September arrives you need to register with a username and add your e-mail address i your settings in Wikimedia Commons (so that the jury can get in touch with you if you win!). The simplest way to participate is to upload your photos with the contest's upload wizard – if you do that, the templates will be added automatically and you only need to fill in the image description and the object's cultural heritage ID number.

You can read a simple for how to upload photos here. See File:Wiki Loves Monuments eksempelbilde.jpg for an example of how an uploaded photo will look if you use the upload wizard.

Whether or not you use the upload wizard you should check that the templates {{no}} and {{cultural heritage ID}} are in the file's description, to ensure that the jury will find the photo.

All photos in the category Images from Wiki Loves Monuments 2015 in Norway by the end of the competition will be considered by the jury.

This photo of Skarnsund Bridge won the first prize in the 2014 competition. Photo by Henny Stokseth.

This photo of the Jøvik trading pier won third prize in the international competition in 2014. Photo by Siri Uldal.