From Wikimedia Commons, the free media repository
< Commons:Wiki Loves Monuments 2018 in the United States
Jump to navigation Jump to search

Wiki Loves Monuments 2018 in the United States saw almost 2,000 people contribute over 10,000 photos of cultural and historic sites from all over the United States and its territories. In addition to National Register of Historic Places sites, we welcomed uploads of sites designated by state- and local-level historical institutions and societies. Hundreds of these photos are being used to help illustrate pages across various Wikimedia projects, including Wikipedia and Wikidata.

After several weeks and three rounds of judging by our jury members, we are pleased to announce the winners of Wiki Loves Monuments 2018 in the United States. These photos are recognized for their photographic quality, artistic merit, and their encyclopedic value as illustrations of unique historical sites.

We were impressed by all of the uploads, and regret having to narrow it down to just 10. That being said - congratulations to the following winners of the US contest and their amazing photographs! Each winner will receive a certificate, t-shirt, and cash prize. In addition, all ten winners will move on to the international jury for a shot at winning an international Wiki Loves Monuments prize.

Built in 1932, the Hidden Lake Lookout (just outside North Cascades National Park) was used as a fire lookup until it was decommissioned by the Forest Service in the 1950s. In 1987, it was added to the National Register of Historic Places.

The Procession Panel at night, located along Comb Ridge in the Bears Ears National Monument. This 15-foot petroglyph panel was created by the Ancient Pueblo Peoples.

The 1823 Ocracoke Light Station, the second-oldest standing lighthouse in North Carolina. The Milky Way Galactic Core can be seen on the background on the early September evening.

The Many Glacier Hotel, located on the shore of Swiftcurrent Lake in Glacier National Park in Montana. Built between 1914 and 1915, the building is composed of a series of chalets.

The Castillo de San Marcos is the oldest masonry fort in the continental United States, located on the shore of Matanzas Bay in St. Augustine, Florida. The fort was built between 1672 and 1695.

Looking through the Cunningham Cabin in Grand Teton National Park, Wyoming. The cabin was built in 1885 by John Pierce Cunningham.

A wind-blown tree in Ka Lae, a National Historic Landmark District and the southernmost point of the Big Island of Hawaii.

The Taos Pueblo in New Mexico. This ancient pueblo belongs to a Taos-speaking Native American tribe of Puebloan people, and is one of the oldest continuously inhabited communities in the United States. 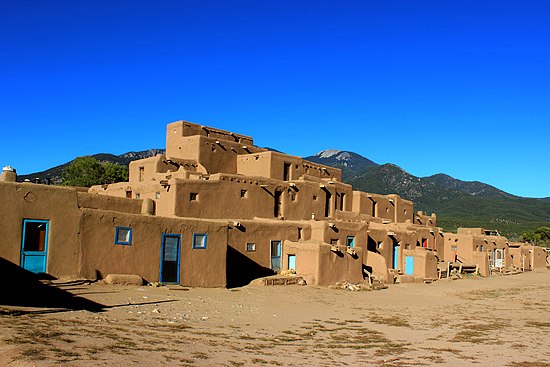 The White Sands National Monument in New Mexico. The monument was designated in 1933, and covers 143,733 acres.