Commons:Wiki Loves Monuments 2020 in the Gambia

Wiki Loves Monuments The Gambia is being organized by volunteers. 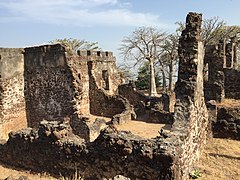 There are a few rules for photos to participate in the international contest. These rules are also adopted as rules for participation on a national level. Every submission should be:

Next to that, there is a practical requirement:

Wiki Loves Monuments is an international photo contest for monuments, organized by Wikimedia this September (2020 extened to November). Wikimedia is the movement behind Wikipedia, the free encyclopedia – a global collaboration authored by volunteers.

Cultural heritage is an important part of the knowledge Wikipedia collects and disseminates. Everybody can contribute images as well as write articles. An image is worth a thousand words, in every language at once and local enthusiasts can (re)discover the cultural, historical, or scientific significance of their neighborhood.

In more than 40 countries all over the world, a national contest will be organized with their national monuments, partners, rules, events and winners.

The contest is inspired by the successful 2010 pilot in the Netherlands, which resulted in 12,500 freely licensed images of monuments that can now be used in Wikipedia and by anybody for any purpose. Since then, the project helped to collect information on 1,5 million monuments from 76 national competitions − with more than 1,7 million pictures submitted by over 60,000 participants, adding to the sum of all human knowledge gathered on Wikipedia.

Any support is welcome: from uploading a single image, spreading the word about the contest, to becoming a partner or sponsor.

What is a Monument in The Gambia?[edit]

It may be that it is not allowed to photograph individual objects and make them available on the Internet under a free license. If you are unsure, ask for permission and find out about gambian copyright laws.