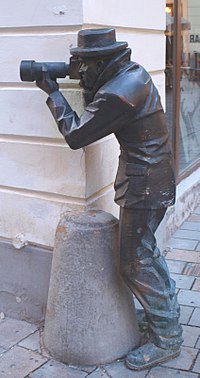 On 30th of July 2013 the Jury announced the results. Thanks to all participating photographers!

Wiki Loves Public Art 2013 is an European wide public photo contest around public art work, organized by Wikimedia chapters and groups. The contest was initiated by Wikimedia Sverige and Europeana and took place for the first time in May 2013. This portal is mainly targeted at the people organizing this contest.

The contest is based on the very successful competition Wiki Loves Monuments (WLM) and it shares the same basic structure. Just like WLM this contest is organized in a federative fashion, so the details on a national level might differ from country to country. The basic concept is that people are invited to upload images of public art works objects under a free license for usage on Wikipedia.

The contest lasts during May 2013, with the results in before the summer. We don't want to intrude upon the already successful Wiki Loves Monument scavenger hunt, and indeed will cooperate with them as much as possible.

The preparation for the contest began in June 2012.

A timeline is available on Commons:Wiki Loves Public Art 2013/Timeline

The results have been announced by the jury in July 2013

You can see the winner on Commons:Wiki Loves Public Art 2013/Results