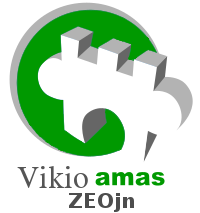 Wiki Loves ZEOs is a photocontest based on Wiki Loves Monuments covering those historical sites, objects and monuments related to Esperanto, Esperantujo or Zamenhof.

The Esperantists (Esperanto-speakers), despite not having a country of their own, are a big community with a culture and identity of their own. Since Zamenhof began Esperanto, Esperantists scattered throughout the world created monuments, named streets and square or simply somehow left some of Esperantujo in those places where they lived. Several of these sites don't have freely licensed photos yet. You can submit your photos about ZEOs through this competition, and help document the heritage of the Esperantist and show it to the entire world. Photographs must be submitted during August 2018, but can have been taken at any time before then.

Unlike other local versions, Vikio Amas ZEOjn is a competition organized collectively by volunteers from different countries, in line with the spirit of internationality of the Esperanto community.

See below for more information on how to participate.

To take part in the contest your photos must be in accordance with at least one of the following categories originally created by Hugo Röllinger in the book «Monumente pri Esperanto»:

In short, photos related to Esperanto, its culture and creator are accepted in a broad sense.

If you have any questions about whether your photo is appropriate to compete or not, do not hesitate to contact us

You can participate in the competition by uploading your photo of one or multiple of ZEOj during August 2018. The photos will be judged by a special jury (to be announced) and the best pictures will be prized! This is your chance to share your proud memories of your stay at Esperantujo.

Between 1 and 31 August, you can submit your photos through the dedicated upload form. Please make sure to include the dedicated ZEO identifier - you can find those on the ZEO lists linked above (for example: co-001).