From Wikimedia Commons, the free media repository
Jump to navigation Jump to search
This project page in other languages:
+/− 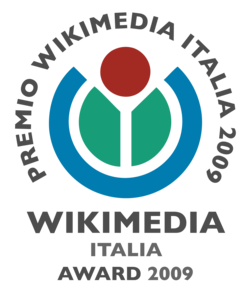 Wikimedia Italia, the Italian chapter of the Wikimedia Foundation, issues an Award for people who gave significant contributions to the open projects supported by Wikimedia Foundation and/or Wikimedia Italia. It is meant to let people aware of the importance of free digital sharing as a key factor in the cultural and social development, in particular through the promotion of knowledge and the use of open content projects.

One of 10 categories of the award is reserved to Wikimedia Commons users. It will be assigned up to three prizes for each category. 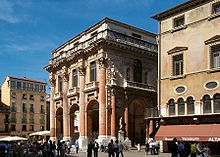 The Loggia del Capitaniato in Vicenza by Palladio, site of the awards ceremony. It stands in front of the Basilica Palladiana.

The Award regarding Wikimedia Commons (cat. E) is assigned to the user(s) who has upload to Wikimedia Commons the best image (photo, illustration) or multimedia, between April 15 and May 15 2009, concerning the theme: "Palladio and his influence in the worldwide architecture". The area of interest is Category:Palladian architecture and nearby.

The awards ceremony took place on Saturday, 23 May 2009, in Vicenza, the "city of Palladio", during the Festival delle libertà digitali (Digital Freedoms Festival) organized by Wikimedia Italia.

See the detailed Call for bids and Bylaws on Wikimedia Italia website.

Wikimedia Commons: best picture (photo, graphics) or multimedia content published between April 15th and May 15th 2009, having theme: "Palladio and his influence on the architecture of the world"

Another category had awarded Commons-related contents:

Content liberation: the best Italian project of liberation of content (text, pictures, etc.) already released in the public domain but unaccessible or released under free license and loaded on Wikimedia projects

The winners on other categories of the award are listed on http://wiki.wikimedia.it/wiki/Vincitori_del_Premio_Wikimedia_Italia_2009