During the plenary sessions of the European Parliament, February 3rd to 6th, 2014, we can perform a photography and editing project in Strasbourg.

Since 2009 Wikipedians are visiting German and Austrian State Parliaments to take pictures of their members. They have been made available under a free license on Wikimedia Commons. They can be used in Wikipedia and other Wikimedia projects but also outside of Wikipedia - in compliance with the license conditions - for example by the Members of Parliament themselves.

Besides the creation of free pictures of politicians, the project offers the deputies the opportunity to ask questions about Wikipedia and to discuss „their“ Wikipedia article (eg. to indicate possible problems with personal rights). For Wikipedians this offers the chance to explain their idea of „Free Knowledge“ and the work of the Wikimedia projects.

In addition these contacts give Wikipedia photographers access to places that are not accessible to the public in order to produce free images. 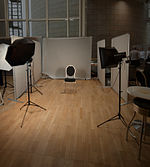 Past Photography Projects in Parliaments[edit]

This project is meant to be an international effort of Wikimedia chapters, individuals and the WMF, similar to the nature of the European Union. The costs have been split: