Zachęta National Gallery of Art (Zachęta - Narodowa Galeria Sztuki) is one of the most respected Polish contemporary art institutions. The main aim of the gallery is to present and support primarily Polish contemporary art and artists. With numerous temporary exhibitions of well known foreign artists, the gallery has also established itself internationally. The Polish term "zachęta" can be translated as encouragement or motivation, and refers to the Society for the Encouragement of Fine Arts founded in Warsaw in 1860.

The National Gallery of Art has been collaborating with Wikimedia Polska on numerous individual projects, culminating in 2013 with the OpenGLAM 2013 conference - first conference on open cultural heritage organised in Poland.
The 2-day international conference was devoted to discussing openness in cultural institutions, best practices and the advantages of open solutions for galleries, libraries, archives, and museums (GLAMs), and related copyright challenges. The openGLAM conference was organised by Zachęta alongside Wikimedia Polska and Centrum Cyfrowe. The event saw presentations given by Wikipedians and open culture activists from diverse European countries: Sweden, Germany, United Kingdom; Europeana, Wikimedia and the Open Culture Foundation representatives participated in the event.

In October 2014 Wikimedia Poland and Zachęta have entered a new stage of their collaboration, in which the Gallery had agreed to share all its relevant open-licensed visual materials from the Open Zachęta (Otwarta Zachęta) database with Wikimedia Commons:

The files will be gradually uploaded to Wikimedia Commons with newly created artwork templates suited to Zachęta's collection. 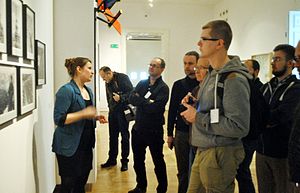 In January 2014, a group of 15 Wikipedians and gallery visitors participated in a photodocumentation day devoted to photographing the building and interiors of Zachęta Gallery, and editing the article about Zachęta on Polish-language Wikipedia. The meeting resulted in about 200 new images of the building, interior and some exhibition artwork being uploaded to appropriate categories on Wikimedia Commons. More information on the meeting can be found on the event page.

Zachęta's materials are available with the CC-BY-SA 3.0 PL license.

So far, the works have been uploaded by Lantuszka and Marta Malina. The template for Zachęta's artworks has been created by Polimerek.