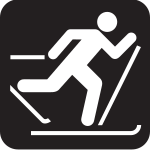 English: Cross-country skiing (aka XC skiing) is an adventure and fitness activity as well as a competitive winter sport.