From Wikimedia Commons, the free media repository
Jump to navigation Jump to search
This gallery in other languages:
English ∙ українська ∙ +/−

Surface of cylinder no. 37. One can see the shape of the audio track.

Surface of cylinder no. 12, quality of audio: 2 of 5. Cylinder was played back more times than №37.

The phonograph cylinder recordings presented on this page are a result of an early 20th century attempt to preserve the tradition of kobzari and lirnyky, realized by Ukrainian folklorists Filaret Kolessa, Opanas Slastion, Klymentiy Kvitka as well as Lesia Ukrainka, an important Ukrainian women writer, who provided financial and organizational support of the project and made some of the recording herself.

The type of music captured is folk music of special kind - Ukrainian dumas, which are a type of sung poetry with accompaniment on kobza, bandura or lira. Later, in 1930-s, kobzari and lirnyky (the folk musicians who performed and passed along their repertoire) were persecuted and the tradition was broken. 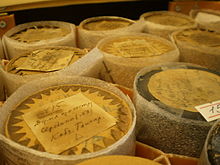 cylinders from the Kolessa collection

The dumas were transcribed by Filaret Kolessa himself and published as a score in 1910 and 1913, but as Lesia Ukrainka said, "This property [recordings] are of value because despite phonograph gives yet incomplete picture of the performance, it is clearly better than musical score in preserving the manner of the performance"[1].

As a very early audio recording medium, phonograph cylinders can't provide the level of audio quality present in tape or gramophone recordings; additionally, every replay of a cylinder on a phonograph decreases the quality of the recording.

The condition of the cylinders, and hence the quality of the recordings is not equal.

All audio files below are provided under the terms of Creative Commons Zero 1.0 public domain dedication, and may be freely used and copied, both commercially and non-commercially, by anyone.