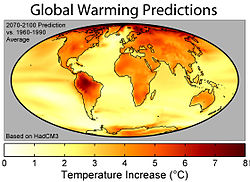 A map of predicted global warming at the end of the 21st century according to the HADCM3 climate model with a business-as-usual emissions scenario (IS92a). This model has an average warming of 3.0°C

Shows climate model predictions for global warming under the SRES A2 emissions scenario(vague – see talk page) relative to global average temperatures in 2000. The A2 scenario family is characterized by a politically and socially diverse world that exhibits sustained economic growth but does not address the inequities between rich and poor nations, and takes no special actions to combat global warming or environmental change issues. This world in 2100 is characterized by large population (15 billion), high total energy use, and moderate levels of fossil fuel dependency (mostly coal).[1] The A2 scenario was the most frequently studied of the SRES scenarios at the time of the IPCC Third Assessment Report.

No likelihood has been attached to any of the SRES scenarios (IPCC, 2007b:44).[3] The SRES scenarios do not include additional climate initiatives, which means that no scenarios are included that explicitly assume implementation of the United Nations Framework Convention on Climate Change or the emissions targets of the Kyoto Protocol (IPCC, 2007a:18).[4]

For the six SRES marker scenarios, IPCC Fourth Assessment Report (2007:7-8) gave a "best estimate" of global mean temperature increase (2090-2099 relative to the period 1980-1999) that ranged from 1.8 °C to 4.0 °C. Over the same time period, the IPCC gave a "likely" range (greater than 66% probability, based on expert judgement) for these scenarios was for a global mean temperature increase of between 1.1 and 6.4 °C. These ranges stem from a combination of uncertainty over future emissions and variations between models regarding the expected response to a given set of emissions. The figure above, showing the disagreement among models for a single scenario, illustrates the latter kind of uncertainty. The lowest temperature increase was for the B1 marker scenario, where the best estimate warming was 1.8 °C (1.1 to 2.9 °C likely range). The highest increase was for the A1F1 marker scenario, of 4.0 °C (2.4 to 6.4 °C likely range). For the A2 marker scenario, the best estimate was 3.4 °C (2.0 to 5.4 °C likely range).

The model data used above was taken from the IPCC-DDC, and the models are as follows:

This figure was created by Robert A. Rohde from public data and is incorporated into the Global Warming Art project.

The following 7 pages use this file: