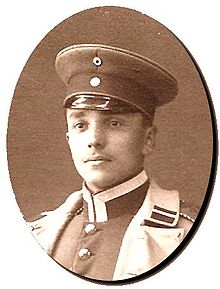 August Friedrich Kellner (February 1, 1885 - November 4, 1970) was born in Vaihingen an der Enz, Germany, and died in Lich. He was a German social democrat, a justice inspector and the author of a secret diary written in the time of the Nazi period in Germany. 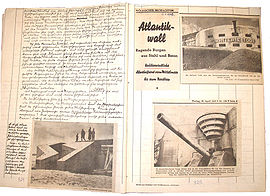 Friedrich Kellner, 23 years old, with army comrades in 1908. He is seated, second from right, wearing a beret. The braid on his chest indicates his status as a sharpshooter.

Friedrich and Pauline Kellner in 1914 in Mainz. The first wedding anniversary of a fifty-seven year marriage.

Friedrich and Pauline Kellner and their son Fred in 1926, on vacation in Schwarzwald, the Black Forest.

The Friedrich Kellner diary consists of 10 volumes with a total of 861 pages. It contains 676 individually dated entries from September 1939 to May 1945. More than 500 newspaper clippings are pasted on the pages of the diary.

A closeup look at the Sütterlin style of lettering used by Friedrich Kellner.

Vaihingen an der Enz, Germany, is the birthplace of Friedrich Kellner. The town is located on the bank of the Enz River. It is not far from Heidelberg.

Limestone statues of Friedrich and Pauline Kellner, included in the museum exhibits of the diary. He is holding a fountain pen, and she is holding a scroll of paper. Sculpted by Robert Scott Kellner.