Wikimedia Commons seeks video files which are within the project scope, such as educational videos, and which are in a free file format, which currently only means WebM and Ogg Theora (and WebM is preferred).

However, most videos available online or produced by recording devices are in other formats, which is why conversion is needed. Wikimedia community wishes to encourage the use of free and open source software. Some of the programs that can be used for video conversion (and also editing) are Miro Video Converter, aTube Catcher and Avidemux. Each has limitations and drawbacks and may not work on all video files. Converting video is a subject that still needs research and testing.

It should be noted that the process can get technically complicated, especially when it comes to advanced settings and command line interfaces, yet it's possible to convert with user-friendly applications with default configuration.

Easiest way for most users[edit]

Start at step 3 and upload the file to Video2commons.

Or another easy way to get video into Wikimedia Commons is as follows:

Another way to convert video format is as follows: If you are working in UBUNTU platform, click APPLICATIONS -> SOUND&VIDEOS-> TRANSMAGEDDON VIDEO TRANSCODER to convert a video format to another.

VideoCutTool is a tool to upload videos from a device, edit and then upload back to Wikimedia Commons. The tool automatically converts the uploaded video to a Commons compatible format. It includes function such as removing audio, cropping video, trimming, and rotating. The tool uses OAuth to login. You can find a description of this tool at Commons:VideoCutTool.

Video2commons is a tool to upload videos from a url to Wikimedia Commons, it automatically converts the video to a commons compatible format. It includes function such as removing audio, subtitles, video. The tool uses OAuth to login. You can find a description of this tool at Commons:video2commons.

Internet Archive offers a video upload tool which automatically converts it to a number of formats, including ogg.

Convert-video-online.com allows you to upload the video file (max. 2Gb). Uploading speed depends on the internet connection speed. A free web app that converts video files, allowing you to change the video format, resolution or size right in a browser. All the app features are accessible free of charge and has no limit on the number of files you can convert. Moreover, users don’t even need to sign up or sign in.

Video.online-convert.com allows you to upload the video file (max. 100MB without registration). The website will convert the video for you and present you with a link to download the converted file. The process may take several minutes depending on the size and quality of the video.

FFmpeg is the Swiss army knife of video conversion. It's a highly flexible software suite that brings together a large amount of tools for handling video, audio, and other multimedia. It provides a command-line program "ffmpeg", with which you can convert also to WebM. See FFmpeg wiki's VP9 Encoding Guide for more information on its usage with VP9 specifically. For even more information on available command-line arguments specific to VP9 encoding, see FFmpeg's built-in help with the command ffmpeg -h encoder=libvpx-vp9

The recommended way to use VP9 is to utilise two-pass constant quality encoding. This is a combination of two modes (2-pass and constant quality) that have traditionally been separate approaches, and is recommended due to some quality-enhancing features in the libvpx encoder only being available in two-pass mode. Two-pass mode goes through the video twice, first to analyze it and second to use the collected data to encode the video efficiently at a certain set average bitrate. Constant quality mode aims to achieve a certain perceptual quality level for all parts of the video. Two-pass constant quality mode does an analysis pass and then encodes the video with a quality level set by the user. The quality level is set with the -crf switch and also requires that -b:v is set to 0 (zero).

There are other useful options available (not all of them specific to VP9), some of which are used in the example commands below and explained further in the bullet points below.

Two-pass encoding is done by running two commands, one for each pass, and specifying which pass you're running with the -pass switch. The first pass creates an analysis log file named ffmpeg2pass-0.log, which can be deleted after the second pass is done.

Since the command lines of different platforms use slightly different syntax (Windows uses NUL instead of /dev/null), the commands for each platform are listed separately.

The two commands can be run back-to-back by combining them with two & signs, like so:

A file file.mp4.webm is created in the current directory.

Those running Linux on a modern Intel-based machine (Kaby/Coffee Lake, 9th generation or later) may see significant speedup by using the Video Acceration API (VAAPI) with ffmpeg. This takes advantage of the Intel QuickSync hardware in the integrated GPU (iGPU) of the Intel UHD Graphics 630 or the Iris Plus. Speeds of up to 8x can be seen using hardware VP9 encoding, versus pure CPU-only encoding speeds of 1-2x.

The following command can be invoked to tap into the VP9 VAAPI driver:

NOTE! Theora is older and significantly less efficient than VP9, leading to higher file sizes (and thus longer upload times and higher storage space use) at the same quality compared to newer formats. In general the use of Theora for new uploads should be avoided and VP9 used instead. Nevertheless, examples for converting to Theora are provided below.

The quality of the video and audio is specified with -q:v and -q:a respectively (0–10, higher is better). See TheoraVorbisEncodingGuide for more information.

Note that by default, FFmpeg will attempt to convert video losslessly from one pixel format to another. Since pixel formats other than yuv420p aren't supported by all browsers, this can become problematic when encoding HDR content or when making a video from a series of images. Motion JPEG files, for example, will be converted by ffmpeg to yuv422p, and PNG files can end up converted to RGB. Not only can these videos cause problems with browser playback, but usually they also end up much larger when encoding them using the regular quality values.

In cases like this, adding -pix_fmt yuv420p to the FFmpeg command will ensure wide playback compatibility by converting the video to the yuv420p format.

Videos can be rotated by using the parameter -vf "transpose=<direction>" where "direction" is one of cclock_flip, clock, cclock or clock_flip (respectively, 90 degrees counter-clockwise and vertical flip, 90 degrees clockwise, 90 degrees counter-clockwise, and 90 degrees clockwise and vertical flip). To rotate 180 degrees, try -vf "vflip,hflip". The video stream must be transcoded during this process, but the audio stream can be copied with -c:a copy if it is already in a suitable codec. It's recommended to specify video transcoding options as in the sections above since the FFmpeg defaults will likely result in a severe drop in quality.

For example, to rotate an existing WebM video 90 degrees clockwise while keeping a decent quality, run:

Libav is a fork of FFmpeg providing the similar command-line program "avconv". It appears that the quality is not as good as oggconvert. Also the first and last seconds of an mp3 file can be lost (which is certainly not OK).

ffmpeg2theora was a popular converter recommended at the Theora project page. It is a cross-platform command-line tool. The latest version is 0.30, released in January 2016.

In most cases you will only need a simple command indicating the name of the file to convert. (Video and audio quality is set to max.)

MPlayer is an open source multimedia player also being capable to transcode files but having the advantage of supporting both a GUI as well as the command line; available for most operating systems including Windows, Linux, and macOS. The MPlayer included by some SMPlayer distributions for Windows does not contain mencoder.exe.

OggConvert allows you to produce ogg/ogv output files. To install:

VLC is a GUI version media player with conversion capabilities. A helpful tutorial can be found at TheoraCookbook. Encoding using the GUI requires a targeted bitrate which yields inferior quality than encoding for a specified video quality.

Xiph's QuickTime Components can be used to add OGG support to QuickTime Pro, under both macOS (versions 10.3.9 to 10.11) and Windows.

Download and install the component, and it will add a "Movie to OGG" option to the File->Export dialog. On macOS, you can only do this using QuickTime 7, and you can download QuickTime 7 by visiting Apple.

youtube-dl is an open-source command line program that can download videos from YouTube and a selection of other video sites, such as archive.org or Vimeo (full list here). If installed alongside FFmpeg or Libav, it can transcode downloaded videos to a free format. The following examples will show how this can be done, using the YouTube video What is Creative Commons? by the Wikimedia Foundation as an example.

Many videos on YouTube already have a WebM version available, using the VP9 and Opus codecs. To check:

youtube-dl -F dPZTh2NKTm4 (note: you can specify the full URL or just the video ID)

The output of the above command shows the available formats, arranged by file extension and resolution:

Individual formats can be downloaded by specifying the format code in the first column:

Video and audio can be downloaded together and combined into a single file with FFmpeg or Libav, if installed:

To download the best available free format for both audio and video without needing to know the format codes:

WebM may not always be available, but FFmpeg or Libav can be used to transcode the video once downloaded. For example:

If either FFmpeg or Libav is on your PATH, youtube-dl will automatically find and use it. Otherwise, you can tell it where to find the conversion program with the --ffmpeg-location option.

See the README for more on what youtube-dl can do (like batch downloading or audio extraction), as well as example commands and frequently asked questions.

See above for multi-platform solutions. Frequent FFmpeg builds and a user forum are offered by zeranoe.

XMedia Recode was recommended by the WebM project. Download an installer from xmedia-recode.de; a portable version is also available.

Windows PowerPoint allows recording a demo session, with sound, and export to mpeg4. Then afterwards you can do further video processing (cut video frames, overlay sound and audio, add subtitling).

See above for multi-platform solutions. 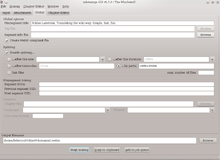 Using mkvmerge to cut a video

See above for the command line tools avconv, ffmpeg, and ffmpeg2theora.

HandBrake is an opensource video converter. It will quickly and simply take an MP4 file and output it as webm. It is available for Linux, MacOS and Windows.

The Xiph oggz tool is able to 'chop' or split a theora file between given start and end times and 'merge' or join two Theora-encoded videos.
Ogg Video Tools is a collection of command-line tools that help with OGG video editing, including resizing, splitting and joining, creating slideshows from png files, and joining or separating audio and video streams from a .ogv file.

Shotcut is a free and open source software for Windows, Linux, macOS. It is based on FFmpeg, Media Lovin' Toolkit, Frei0r, Qt, and ICU, among others. Versions 14.11 (2014-11) and later support OPUS.

WebM files are just MKV (Matroska) files which use a subset of the features for this format. With mkvtoolnix (GPLv2 for all platforms) it's very easy to manipulate them. VP9 video and OPUS audio in a WebM container are supported since 2013.

OpenShot Video Editor is an Open source graphical video editing tool available for all current platforms. It is an ideal platform to edit and export videos to ogv format. Choose the "All Formats OGG High" format with the highest possible resolution.

Kdenlive is an open-source video editor for GNU/Linux, BSD, macOS and (recently) Windows.