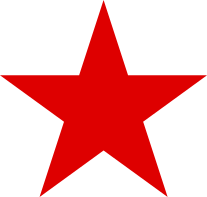 The Red Star is one of the most ancient of symbols/ideograms. Formed by lines connecting the same length at angles of 36°. The red five-pointed star is an important religious and ideological sign, widely used as a symbol in countries around the world. Associated with communism, images of the red star have however appeared at different times and on all continents, as a basic element of flags, state emblems, logos, sports clubs, in monumental art, ornaments and as brand logos, the red star as a symbol of Glory is used to awards and honors.