Let us consider continuous functions that only depend on the orientation in space (θ,φ). The spherical harmonics are a basis of such functions.

The decomposition in spherical harmonics is used to represent these functions ; it is similar to the Fourier transform for periodic functions.

In the plane (circular harmonics)[edit]

A function is decomposed as

where Yl is the circular harmonic. It is expressed as

where Pl is the Legendre polynomial

The circular harmonics are represented in three ways: 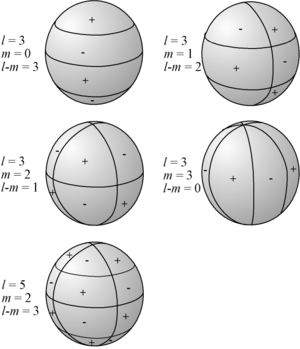 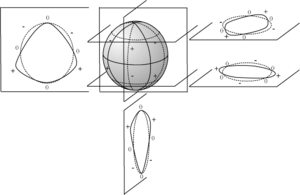 the Y32 with four sections
Retrieved from "https://commons.wikimedia.org/w/index.php?title=Spherical_harmonic&oldid=362242951"
Category: