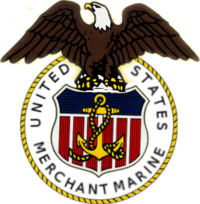 Seal of the U.S. Merchant Marine
English: The United States Merchant Marine consists of the merchant ships that are transport goods during time of peace and acts as an auxiliary to the United States Navy during times of war. Under hazardous conditions the merchant marine delivers troops and supplies for the military, as well as goods for the welfare of the country, often by convoy.