Schvenn, is a pseudonym I created in 1998. It started with Hotmail. When I first started using the Internet, sometime around 1997, I saw plenty of examples of good usernames and e-mail addresses ruined by being forced to add numbers on the end. At that point, I was determined to create a username that would be unique, original and protect me from having to remember ridiculous extensions. I therefore created the name Schvenn, which was a derivation of the Swedish name Sven, but with a German twist. I do come from German descent, but do not have any Swedish heritage, of which I'm aware. I chose a Swedish name because of an inside joke that I and a close friend had about a comic book character at the time. Regardless, the name has stuck. I've used it on hundreds of sites and not had to modify it with numbers or extensions, just as I had originally planned. I've reserved names for most of the popular web services around the world and have run several websites including the now defunct Schvenn's NASCHCAR Schack, always using this unique name. At the time of writing this entry, the vast majority of entries on the Internet that refer to Schvenn are my own. However, a handful of people from around the world have now adopted this name, as well. Nothing stays unique forever, but as they say "Imitation is the sincerest form of flattery." Has anyone ever figured out who coined that phrase? 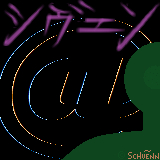 I created this logo recently, to unify my logins and identities across the Internet. There's not much more to it than that. If you look at the logo you will notice Oriental characters which phonetically spell Schvenn, or as close a derivative as I could muster. The @ symbol should be apparent, as well as a subtle green partial bust of a figure in the bottom right corner. There's also an authour's stamp. It took me about 10 minutes to create this logo and frankly it shows, but like the name, it's unique and easily identified.