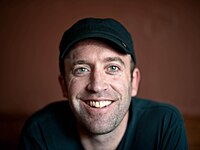 Hi, my name is Matthew Roth. I'm a writer living in the Glen Park neighborhood of San Francisco. I was born in Santa Barbara, California, and lived the early part of my life in the northeastern part of Nevada, in Elko County. The closest town was Wells, Nevada, where I went to middle school. I later lived in Park City, Utah, where I went to high school and where I learned to ski pretty well. I have also lived in New York City, New York, Buenos Aires, Argentina, and Rio de Janeiro, Brazil.