Methodology. Each Party color is graded by saturation to represent the number of votes (percentage to the total number cast) of votes allocated to each of the highest vote polling parties per region.

This map forms part of a collection on the published results

The collection of images below provide a graphical representation of the 2007 Ukrainian Parliamentary Election.

It is important when analysing the information presented that the user notes that the information is based on National results and also as a percentage of the regional tally as provided by the Ukrainian Electoral Committee.

The swing analysis charts are based on the comparison of the 2006 to 2007 election results.

The carts are designed to show a correct correlation between each party and region by means of charts and color shaded maps. It is best that both maps and charts are displayed together.

A swing analysis is common in any election. It shows the change in voter percentage for each party by regions from 2006 to 2007. 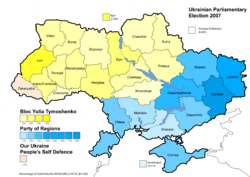 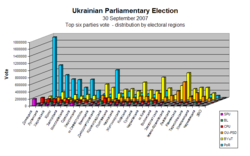