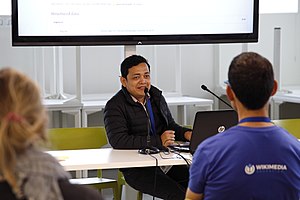 I am a former administrator of Bikol Sentral Wikipedia. I spearheaded several meet-ups of Filipino Wikipedians in the region, dubbed as Naga Meet-ups and organized projects promoting the local Wikipedia prior to formally joining Wikimedia Philippines on February 21, 2012 until I was expelled on May 31, 2015.

Together with two other prolific Bikol Wikipedia contributors, Gil Gregorio and Ramon Olaño, Jr., Bikol Community was formed on October 19, 2009 and was officially recognized by the WMPH on April 27, 2012 as the first Philippine Wikimedia Community to promote Wikimedia projects in the native languages of the Bicol Region.

Aside from writing, I am also into running. I have supported and joined different running events and have even spearheaded several runs for a cause.

For inquiries, I can be reached through irvinstotomas