Take a look at my uploaded images 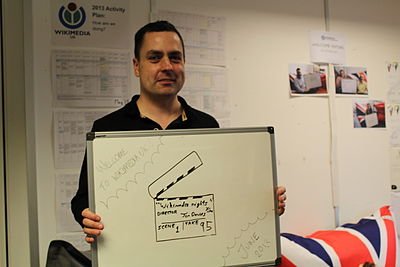 Me visiting the Wikimedia UK office. More images of me

My main User page is at English Wikipedia.

From 13 February 2020 onwards, I am the Wikimedian In Residence at the Khalili Collections. This involves some uploads of material to Commons, which are now mostly done through a dedicated account, User:MartinPoulter (KC WIR). The project page is at w:en:Wikipedia:GLAM/Khalili.

From 25 October 2016 to 31 October 2019, I was employed as the Wikimedian In Residence at the University of Oxford, based at the Bodleian Libraries. This was mainly a role that involves training staff within the university and sharing images and data from research projects.

From April 2015 to March 2016, I worked as the Wikimedian In Residence for the Bodleian Libraries, Oxford. This involves using this account for paid editing in addition to my usual volunteer work. I have put in place a system for bulk uploading to Commons from the Bodleian's collections, which I have been specifically authorised to release under a free licence. See Category:Files uploaded by the Bodleian Libraries' Wikimedian In Residence. There is a project page on Wikipedia.

Scientific categories I like to tidy up now and then[edit]

This work is made much easier by the Cat-a-lot gadget.

I have access to both Photoshop and GIMP and use these for basic restoration such as contrast correction, rotation, or removing scratches.