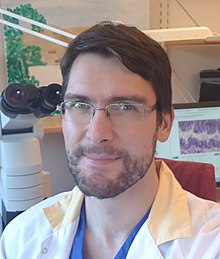 He was born in Gothenburg, Sweden, and is a grandchild of Estonian historian Karin Aasma. He grew up in Uddevalla on the Swedish west coast. He decided to become a doctor while backpacking for half a year in 2005, taking the Trans-Siberian train to China and crossing the Himalayas from Tibet to Nepal. He graduated from Uppsala University, Faculty of Medicine, Sweden, in 2013. He subsequently did 2 years of rotational internship, and has worked 1.5 years as a physician in obstetrics and gynecology, 3 years in radiology and one year in pathology in Sweden. He subsequently moved to the United States with his wife, and since June 2020 he is working as a resident in pathology at Danbury Hospital, Connecticut.

He has contributed to Wikipedia since 2006, including a multitude of medical images. He is the creator and current editor-in-chief of WikiJournal of Medicine, a new Wikipedia-integrated, peer-reviewed, open-access academic journal.[1] He is also the creator of Radlines, and Patholines, containing open access guidelines in radiology and pathology, respectively. 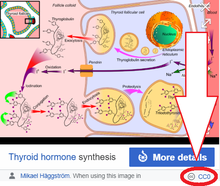 Finding the license of the picture in Wikipedia.

For editors wanting to know what attribution to use when including one of my pictures in a work: Click the image to see its licensing (seen in bottom right corner, pictured). CC0 means that the image is in the Public Domain under the Creative Commons CC0 1.0 Universal Public Domain Dedication which means that you can copy, modify, distribute and perform the works, even for commercial purposes, all without asking permission. If you still want to add an attribution, you may write for example:

If the license has "SA" or "share-alike" in its name, then a license description should be included in the attribution as well, such as "released under the Attribution-Share Alike 3.0 Unported license". If there the image description mentions several authors, an addition such as "Created by [other image author(s)] and Mikael Häggström, MD".

Essentially all my images up to 2014 are included in an image collection which may also be attributed as:

Attributions may be written in the image caption, or in a separate reference list.

Sufficient informed consent has been obtained for online publication from all individuals depicted on medical imaging created by me.

Images created after December 2018 have been sorted into categories at: Category:Mikael Häggström (with an ongoing process to sort even earlier images to there as well).

The image version of highest resolution is generally found by clicking the "Full resolution" link, located below the image on its description page.

I am now most active in Wikiversity, as editor-in-chief of Wikiversity Journal of Medicine. In Wikipedia, I frequently add radiologic images (with written consent from the subjects), and I often correct or add to the prose of articles.

I use Inkscape, GIMP and MS Paint to create images.

1629 articles created as per July 2017, exluding redirects, for example: