Location of Tokyo and Chiba You may be have misunderstanding what it be name of African if you have hearing "Nanashinodenyaku" , but I am respectable Japanese. "Nanashinodensyaku" transcribes it into "名無し野電車区" in Japnese, and is a one kind of code name. I live in Chiba that locates to 22 miles of east of Tokyo, and go to the various places and take pictures because there are Tokyo-Narita International Airport, Keiyo petrochemical complex, and also beautiful nature. 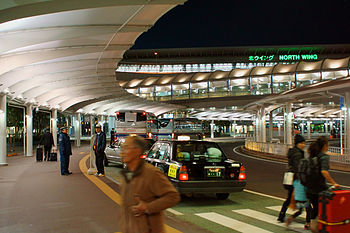 The North Wing Building soars on the head of passengers which are coming and going busily.

This is a wide view of Tokyo-Narita Airport facilities and terminals which is looked from Sakuranoyama Park. This panoramic photograph was made by composition of the Eight photographs which are taken simultaneously. It is Runway A(16R) that is visible to the front. There is KLM B747 just depariting for Schiphol Airport, and many airplanes which is wating for a takeoff are making the sequence there. Many buildings which appear from the left of a control tower to the center of a photograph are cargo facility groups. Two towers which are visible in the left of KLM B747 are control towers. On the right of KLM B747, Terminal 1 can be seen. Three hangars corresponding to B747 are visible to the right-hand side of Terminal 1. JAL, ANA and DELTA are using them.

That day, I had had International Airport (Tokyo Narita Airport) for pick-up group travel that I have to arrange.

They are regular customer who are discerning and have gotten available our annually, not need a tour conductor, but that airport transfers that ...,, and I became a pick-up of the day.

I was wating in the arrival lobby...,

Many teenage girls were caming out while commotion noisily. From the chatter of the girls, they seemed to have gone to Saipan.They passed through the right beside me, that moment, I felt chills like freezing suddenly, and turned around.

Looked at them, they had been carrying bloody Japanese soldiers of World War Ⅱ on their back one by one !!

Bad for them, but it might be good that the Japanese soldiers who died in the distant island in World War Ⅱ was able to return to Japan.

It is the night view of Nippon Steel & Sumitomo Metal Kimitsu ironworks. The amount of production of annual iron is 10,026,000 tons and is the most greatest ironworks in Japan.

Keiyo Konbinat (Keiyo petrochemical complex) is the most greatest industrial complex in Japan, and supports industry of Japan at the base. There are many of oil refineries, chemical factories, ironworks, and thermal power plants. 20% of oil used in Japan, 30% of ethylene, and 10% of steel are produced at there, and are generated electricity electric almost none of used in Tokyo metropolitan area. Natural gas is used for the fuel of the thermal power plants and exhausts only water and carbon dioxide, and soot and waste fluid are proccesed in other factories and are considered environment.

Ichihara fishing park back to the skyscrapers of Makuhari 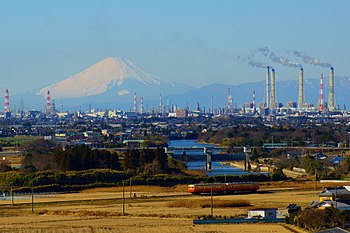 This is the distant view of the Keiyo industrial belt where Mt. Fuji was a background. Three chimneys in the right are Anegasaki LNG thermal power plant (3,600,000 kilowatts of output). The Highest chimney in the left of Anegasaki LNG thermal power plant is Idemitsu Chiba oil refinery (220,000 barrels of daily throughput). The chimney applied by red and white in the right is Mitsui Chemicals Chiba factory. Three chimneys in the left are Sumitomo Chemical Chiba factory. 33% of the ethylene consumed in Japan is made at Keiyo industrial belt.

In Keiyo petrochemical complex, we cannot approache the sea easily because the shore is filled in factories. Therefore the artificial barge was built in the quay to possible enjoying fishing. The drainage of the factories is purified so that you can drink, and is ideal for fishing because fish gather around the warm drainage.