Of all of my Wikipedia images, this one seems to have been used on other sights more than the rest. This Snowy Owl took an American Black Duck in Biddeford Pool, ME. 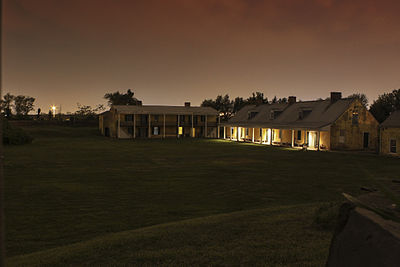 Fort Mifflin is supposedly one of the most haunted places in the US. This image, when viewed full-sized, appears to show a ghost. Its a 30 second exposure and I believe the person sitting on the bench stood in front of a light long enough to leave a transparent shadow.

My name is Chuck Homler and I recently relocated to Philadelphia (because of the Elton John song, not the movie with Tom Hanks) from Saco, ME (where there was a dirth of pop culture references about the community.) You can find my contributions throughout wikipedia, mostly photographs and you can find me all over the internet posting photos, mostly of birds. I'm a history buff, have an insatiable appetite for knowledge and then I like to share that knowledge with anyone who is interested. I also enjoy photography, shooting video and editing audio.

I was born in Brooklyn, NY and raised on Staten Island for the first 8 years of my life. Growing up on Staten Island has forever ruined products labelled "Outdoor Fresh Scent" for me. At the age of 8 my family moved to Monmouth County, NJ. After graduating High School I went to college to pursue a journalism degree and eventually found myself working in radio at WHTG and WHTG-FM 106.3 from 1994 - 1999. After that I moved across town to WJLK-FM, 94.3 and my career path changed from being predominantly an on-air personality to handling the Production and the Imaging for WADB and WJLK-FM and eventually I was the first production director for WCHR-FM, 105.7 the Hawk.

In 2004, I took a position in Portland, Maine as the production director for all of Nassau Broadcasting's properties in the state. I held this position until 2008. It was during this time that I became fascinated with birds and started recording them on video. In 2009, after the economic downturn, I found myself without a job. While searching for work I also continued searching for wildlife, especially birds. I discovered a pair of Peregrine Falcons that were overwintering in my town. I reported these birds to the state and was given the naming rights to them, naming them Charles and Isabella after Charles V, the Holy Roman Emperor, and his Queen Isabella who in exchange for the use of the island of Malta by the Knights Hospitaller, were given a Peregrine Falcon each year. And it was a sneaky way of naming one of them after myself without appearing like a raging narcissist.

I changed careers and started managing Condominium and Homeowners Associations in 2009. In 2014, I took a position managing a High-Rise Condominium in Logan Square, Philadelphia. Some of my contributions were made possible by access that I had to certain restricted locations.

My one piece of advice to people is to occasionally just LOOK UP! You don't know what you are missing.

In 2013 I was given a weekly column in the Biddeford Courier; I called it Focus On Wildlife. Every week a new photo ran of an animal that I photographed in York or Cumberland Counties in Maine. Images were sold to raise money for the Center for Wildlife in Cape Neddick, ME. This column ran until I moved to Philadelphia in 2014. I am most proud of this result: