Dear Old Moonraker, I am currently writing a not-for-profit book chapter for University College London (UCL) and would be delighted if I could use this great image of the hand x-ray. Would this be ok? Thank you, Joseph —Preceding unsigned comment was added by 144.82.8.111 (talk) 18:10, 9 January 2020 (UTC)

Thanks—I'll bear that in mind for the next time. Apologies for the minor upset I caused on "Oxted Line" on en:wikipedia by substituting my effort for yours—you have loyal fans!--Old Moonraker 12:40, 23 May 2007 (UTC) 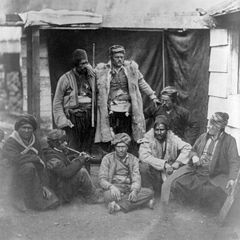 with histogram adjusted and artifact removal

To give you a taste of what can be found, here are some interesting faces from Roger Fenton's Crimean War photographs. I like to set the Library of Congress previews to thumbnail format; click and scroll down when you see one you like to find out whether that has a high resolution version. Best regards, Durova 04:54, 10 January 2008 (UTC)

Thank you for providing images to the Wikimedia Commons. Please keep in mind that images uploaded to the Commons should be useful to all users of Wikimedia projects. This is possible only if the images can be found by other people.

To allow others to find the images you uploaded here, the images should be in some place that can be found by navigating the category structure. This means that you should put the images into appropriate topic pages, categories, optionally galleries, or both of them (see Commons:Categories). To find good categories for your images, the CommonSense tool may help.

You can find a convenient overview of your uploaded files in this gallery.

The important point is that the images should be placed in the general structure somewhere. There are a large number of completely unsorted images on the Commons right now. If you would like to help to place some of those images where they can be found, please do!

I am now proud owner of a TUSC account!

http://bits.wikimedia.org/skins-1.5/common/images/button_sig.png Hey Old Moonraker! I've created a new version of the six Shakespear signatures. How do I replace the one we have? Tom Reedy (talk) 23:07, 21 January 2010 (UTC)

The illustration on the Globe Theatre page needs some tweaking:

---The correct title is "Long View of London," not Southwark.

---The illustration is a only sketch for the later, engraved version.

I own a full-size reprint of the final six-sheet panorama. I suppose I could shoot a detail of the Globe (and the "Beere Baiting") to use; but though the 1647 original is obviously PD, I don't understand the law re. exact, unmodified repros of it.

Also, I'm too Luddite to change the caption on the ill. so I just made a note of it on the discussion page. Can you help?

I meant to use the sketch, rather than the Antwerp engraving, as more immediate (and without the need to fix the name switch), but "Southwark" was a mistake. I'll look at en:Globe Theatre again. Thanks for the notification. --Old Moonraker (talk) 09:36, 19 January 2011 (UTC)

Our non-profit educational resources group would like to use the photo of the vase at Mykonos (http://commons.wikimedia.org/wiki/File:Mykonos_vase.jpg) for one of our publications. Could you confirm that this image is available for use under the Creative Commons Attribution-Share Alike License, and could you indicate who should be credited for this image and in what way? 24.83.213.104 18:05, 20 June 2011 (UTC) Genie MacLeod, The Critical Thinking Consortium

The original poster was "Travelling Runes", on Flickr. He has released it as Attribution-ShareAlike 2.0 Generic. This means that the Wikimedia version (which has been retouched by User:Beyond My Ken) and all subsequent versions must carry the attribution and the same license, but is otherwise free to use in your project. --Old Moonraker (talk) 21:05, 20 June 2011 (UTC)

ok but what about the part "Nevertheless, short excerpts from them may be reproduced without authorization, on condition that the source is indicated."