My Name Pranayraj Vangari. did my Masters in Performing Arts from Potti Sreeramulu Telugu University,Hyderabad, during this I worked as an Artiste, Assistant Director and Back Stage. Right now am pursuing M.phil in the same University and Working as a Project Assistant since July 2012 for “Theatre Outreach Unit (TOU)” which is part of Dept. of Theatre Arts, University of Hyderabad. 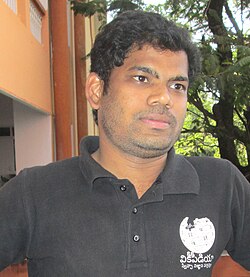 I completed 100wikidays and continued to 200wikidays, 300wikidays, Wikiyear, 400wikidays and 500wikidays planning to do 1000wikidays. This is one of the rarest achievements on the Wiki-world. Writing one article one day everyday. Contributing to sister projects (Wikicommons, Wikidata, Wikisource) and guided my frnds into wikipedians and new Wikipedians.

My Wikiyear achievement has been appreciated by the honorable Vice President of India through Twitter.[1][2]

Telangana IT Minister also appreciated through Twitter[3] and he officially felicitated in his chamber.[4]

my contribution in Wiki[edit]