The Schachnerhof, my place of birth.

My place of birth forms part of the Chiemgau region of southeastern Bavaria and is situated right at the northern edge of the Northern Calcareous Alps, a northward thrusted unit of the Eastern Alps.

I am Libran and a water dragon. 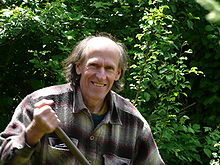 Studied one year geology at the University of Minnesota, United States, followed by three years geosciences at the Georg-August Universität in Göttingen, Germany, from where I received my BSc.

Then I changed over to environmental science and did one year at the University of East Anglia in Norwich, England.

My academic training was rounded off with a year at Université Pierre et Marie Curie in Paris, France, studying structural geology & remote sensing, finishing with a tectonic map and an interpretation of the Eastern Alps gleaned from satellite imagery; the results were incorporated into my M.S. thesis: The Eastern Alps and their Lineaments.

Being a fervent adept of geological education in the field I have gained lots of first-hand experience via field courses, field mapping, excursions, private travels and mountaineering expeditions in the following countries and terrains:

Since leaving Paris I have been working as a freelance translator in the three languages English-French-German, which I can interchange at wish. I have translated several books in very different subjects, but also scientific articles and abstracts.

Worked in wholefood shops and in a bookshop collective for quite some time.

Being a trained carpenter I have gained experience in the building trade.

My main interest though still resides in Geodynamics - the Earth's Snake Power as Native Americans might call it. I am particularly interested in the connection of large-scale structures with flow phenomena as observable in the atmosphere & oceans. I do interprete the Alpine "whorl" - obviously my favourite topic - as a vortex structure, part of a much larger flow (system). Hence my renewed interest in fluid dynamics and my problem in accepting the standard textbook plate tectonics paradigm - in my esteem way too rigid!

My principle is: watching a satellite slow motion condensing the last twelve hours of meteorological happening on parts of our globe will give you more insight about geotectonic structures than a whole stack of textbooks!

I live now in a medieval village near Nontron in "Jacquou le Croquant" country - i.e. in the Natural Park of the Périgord-Limousin Region (Parc Naturel Régional Périgord-Limousin - PNRPL) in SW-France, where "Robin des Bois" hangs out...